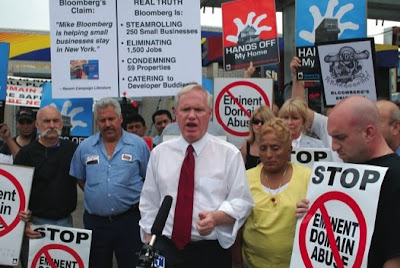 With the city ready to begin the process of using eminent domain to seize private property at Willets Point, land owners are vowing to “fight to the bitter end” to retain ownership of their land.

Councilman Tony Avella (D-Bayside) and a group of Willets Point property owners gathered in front of Shea Gas Station on 127th Place on Monday to call attention to what they say is hypocrisy on the part of the city. Property owners claim the city told them that negotiations for properties in the project’s second and third phases are on hold, but has since signaled that it is moving forward with eminent domain.

The city plans to acquire the land at the 62-acre site adjacent to CitiField to pave the way for a glitzy redevelopment featuring housing, restaurants, retail, a hotel, convention center and other amenities. In November, City Council voted to approve the project, which just two members – Avella and Charles Barron – voting against it. Councilwoman Elizabeth Crowley (D-Middle Village), who was not in office at the time of the vote, refused to discuss her feelings about the project or her opinion on the potential use of eminent domain.

While property owners have yet to receive a formal letter informing them that the city intends to seize the property, several say their employees were approached by representatives of Cornerstone Realty Group, which is assisting the city in its efforts to relocate the businesses. In addition, the city has scheduled a public hearing on June 22 in Flushing Town Hall, which is the first step in the eminent domain process.

“Here we go again to show the hypocrisy of Michael Bloomberg and the Economic Development Corporation (EDC),” said Avella. “While they keep saying they’re going to negotiate fairly… all of a sudden they have an outside consultant going door to door.”

He said that the EDC was on the phone with his office within 15 minutes after he announced the press conference last Friday. They wanted to assure him that the city is not yet proceeding with eminent domain, which led him to wonder who it is that is contacting the business owners. “It’s amazing the hypocrisy and how they talk out of both sides of their mouths… Michael Bloomberg is a traitor to the American dream and to democracy in this city.”

According to a May 26 press release, the EDC has reached deals for about 40 acres of the 62-acre site after striking agreements with two more property owners. The city “will continue to reach out to business and property owners in Willets Point to negotiate fair acquisition agreements,” the EDC said in the statement.

Property owner Irene Presti Giacomo said that the property is the sole source of income for her and her daughters since her husband passed away. She pointed out that Bloomberg has made helping women business owners a part of his campaign, and wonders why that doesn’t apply to her. “I’ve been paying taxes here for years for services not delivered,” she said. “My property is not for sale. If they take my property, what happens to me?”

Jerry Antonacci of Crown Containers took exception with Bloomberg campaign literature touting his programs to help small businesses, which the mayor claims is the “bread and butter” of the city’s economy. The “reality,” said Antonacci, is that the administration is steamrolling 250 small businesses, eliminating 1,500 jobs, condemning 59 properties in an effort to cater to politically-connected developers. “We’re the only one fighting. He isn’t fighting for us,” said Antonacci.

The property owners have filed a lawsuit in hopes of forcing the city to stop moving forward with eminent domain. “This is a land grab to give to the development community, and they’re going to make a huge amount of money off the blood, sweat and tears of the property owners, and that’s un-American,” said Avella. “This is going to be a fight to the bitter end.”
Posted by The Forum Newsgroup at 11:35 AM