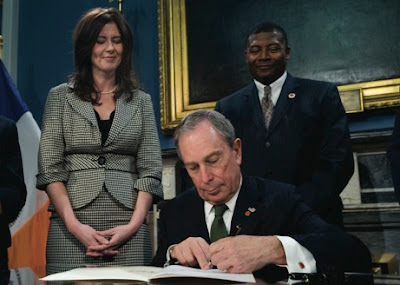 Spurred by Tragedies in Middle Village and Chinatown

The penalty for leaving a vehicle running and unattended has been increased now that a bill sponsored by Councilwoman Elizabeth Crowley in the wake of several tragedies earlier this year has been signed into law by Mayor Michael Bloomberg.

Crowley introduced the bill after 16-year-old Middle Village resident Robert Ogle and his friend, Alex Paul, 20, of Cypress Hills, were struck and killed by a drunk driver who had just stolen a running vehicle left unattended outside a local deli. A month prior, an unoccupied van was left in reverse and mounted a sidewalk in Chinatown, ramming into a group of preschool students, killing two and injuring at least 11 others.

“Leaving your car running and unattended seems like a minor, careless mistake but all New Yorkers must understand that it is irresponsible, dangerous and potentially deadly,” said Crowley, who noted that the current fine for leaving your car ignition on and unattended is just five dollars. Under the new law, the fine has been raised to $250 “to deter anyone from being careless with their vehicles,” she added.

The bill was introduced at the March 24 City Council meeting and was the subject of testimony at a transportation committee hearing last month. Robert’s parents, Brendan and Mei Ogle, testified at each hearing in favor of the new law. “I know too well that an unattended and running car can become a deadly weapon,” said Brendan Ogle. “It is necessary to increase the awareness and penalties for people who are careless with their personal property because money talks.”

In partnership with the new law, Crowley and the Ogle family, along with Councilman John Liu (D-Flushing) are launching a public awareness campaign to prevent people from leaving their cars running while unattended.
Posted by The Forum Newsgroup at 11:10 AM