Board Seeks Demolition of Glendale Building 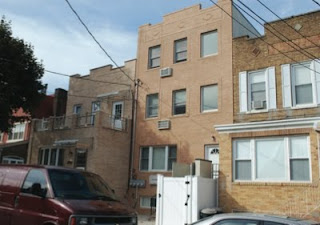 The local community board wants the city to force the owner of an occupied three-family home to dismantle the structure because it violates a host of zoning laws, wasn’t built in accordance with submitted plans and doesn’t have a certificate of occupancy.

Community Board 5 “decided to be quite proactive” in regards to the situation at 78-46 79th Place in Glendale, according to Walter Sanchez, chair of the board’s Land Use Committee. A garage serving the multi-family unit next door was replaced with a three-family building, which the board claims doesn’t conform to either the R5 zoning in effect prior to the March 2006 area rezoning or the current R4-1 regulations.

Sanchez reported at the November board meeting that District Manager Gary Giordano wrote a letter to the Buildings Department about the concerns, which include lack of parking, work without a permit and violations of front and side yard regulations. The board is “really concerned about the safety of the people inside” in light of recent fatal fires, said Sanchez, especially since it involved self-certified plans. “We want to put it on the record,” Sanchez said of the letter, which was copied to area elected officials.

“After additional review, our [committee] remains concerned and quite sure that the three family home constructed at the property in question complies neither” with the current or previous zoning, wrote Giordano. “To our knowledge, self-certified plans were filed... for the conversion of an existing two-family house to a five-family dwelling. In actuality, what has been done is to demolish the garage serving 78-44 79Place and build a three-story dwelling where the garage was.”

As a result, neither property now has off-street parking, which is required. Further, the garage was torn down without a permit, which the owner only obtained after receiving a violation, according to Giordano. A stop work order “related to this questionable construction” was issued in November 2008, and the property still doesn’t have a valid certificate of occupancy, wrote Giordano, adding that it is “very questionable” whether the property meets yard setback requirements.

The advisory board voted 38 to 0 in October in favor of having the building dismantled. Last week, a DOB spokeswoman said a stop-work order had been issued at the fully-completed building and that the application was being reviewed. When asked what course of action, including demolition, was possible, she said an inspector would visit the property and determine an appropriate course of action.

No updates regarding recent inspections have been posted on the DOB online records, and the department did not respond to a followup inquiry this week. On Wednesday, Giordano said he is still awaiting a response to his letter.
Posted by The Forum Newsgroup at 11:00 AM