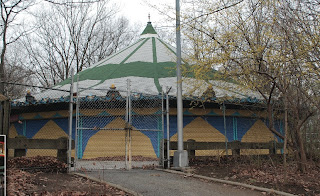 The wheels are turning to get the shuttered Forest Park carousel open after more than two years without an operator. The Parks Department is drafting request for proposals that would link the historic carousel with another in Flushing Meadows Corona Park.

The request—expected to be released next month—will allow the new concessionaire running the carousel in Forest Park to run the traditionally more profitable carousel in Flushing Meadows near the Queens Zoo when the current vendor’s contract expires in 2012.

Two prior requests for a Forest Park carousel operator in January and March 2009 went unanswered until 2010, and even then Parks was unable to close the bid with their highest-rated applicant.

“We hope this offer will be more attractive to prospective bidders and result in a first-class operation for the public to enjoy,” Parks Department Spokesperson Patricia Bertuccio said.

Ed Wendell of the Woodhaven Resident’s Block Association (WRBA), who runs a Facebook page dedicated to the revival of the Forest Park carousel, welcomed the new proposal.

“People have been frustrated with [Parks] lack of creativity,” Wendell said. “I like this idea. From what I hear, they’re not real happy with the current vendor [at Flushing Meadows].”

New York One LLC, which operates the Flushing Meadows carousel, let its Forest Park contract lapse in 2008 and that carousel was closed.

A member of New York One LLC, and president of the Makkos Group, George Makkos, said he was unaware of the Parks Department plan to link the two carousels until he read a February 9 article in The Daily News. He said New York One LLC would make no decision on whether to bid on the offer until the request is released.

Meanwhile, the Forest Park carousel remains barbed and locked, sending “a depressing message,” said Wendell. “It’s been three consecutive years that it has been rotting and rusting.”

The park’s original carousel burnt down in 1966, and despite city assurances that it would be restored quickly, it wasn’t until 1972 that the carousel was installed, brought south from its home in Massachusetts. The carousel has elaborate wooden figures carved over 100 years ago by artist Daniel Carl Muller. The day it opened, the park was filled with police—crime in the park had become rampant. The park was slowly cleaned up and in 1989, after years of wear, the city contracted artist Marvin Sylvor to give the horses, unicorns and occasional tiger a makeover.

Community Board 9 District Manager Mary Ann Carey said she doesn’t know much about the Parks Department’s anticipated proposal but is eager for a qualified vendor to take over the carousel—a priority for CB9 since the early 1980s.

“Everybody wants to see it operating and see someone who can maintain it that has an imagination and some talent in drawing people in,” Carey said. “We need to do something unique.”
“Maybe somebody needs to talk to Donald Trump,” she added with a laugh.
Posted by The Forum Newsgroup at 11:14 AM

I do not understand why such a wonderful piece of history is being neglected. As a resident of Woodhaven, it has been very hard for my family and I to see the carousel everytime we go to the park with no chance of being able to use it. Let's see it re-open this summer!