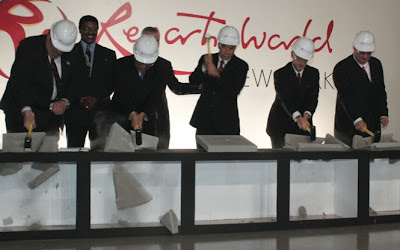 In roughly six months, Genting New York will open Resorts World New York at Aqueduct Racetrack in Ozone Park, marking the end of the drawn-out soap opera to open a racino. Genting officials and politicians gathered in the racetrack’s clubhouse on Thursday for a groundbreaking ceremony.

Genting is a subsidiary of Genting Malaysia Berhad, one of the world’s largest resorts and tourism companies. It owns Norwegian Cruise Lines and own Asia’s largest casino. This will be the company’s first venture in the United States, but Genting President Michael Speller vowed to make it a showcase.

Finding a vendor to operate the racino at Aqueduct was not an easy process, something Lottery Director Gordon Medenica acknowledged by kicking off the ceremony by quoting singer Jerry Garcia: “What a long strange trip it’s been.”

That trip started in 2001 when video lottery terminals were approved for Aqueduct and other New York racetracks. And the process was strange. In 2008 company Delaware North was selected but could not pay its promised $370 million upfront payment. It became worse the following year when Aqueduct Entertainment Group (AEG) was selected, which sparked cries of favoritism and corruption among state legislators. Inspector General Joseph Fisch recently released a scathing report about the selection of AEG.

But finally, under a new bidding process where Request for Proposals were administered and vetted by New York Lottery, Genting was selected and almost immediately paid its promised $380 million up- front payment.

Governor David Paterson said the new partnership will be a “complete revitalization for Aqueduct and also the community that surrounds it.” Paterson is confident that Aqueduct will create employment and business opportunities for the area and will provide the state revenue to replenish education funding.

Job creation was the biggest issue in the community concerning the Aqueduct project. “Within the last two months, we’ve done a lot of listening in this community,” Speller said, “and one issue has come up time and time again: Queens wants and needs jobs.” Now Genting can offer more than 1,300 construction jobs and more than 800 permanent jobs to the area. For those who feared the construction jobs would go to out of state and non-union workers, Genting signed a labor agreement with Gary LaBarbera, President of the Building and Construction Trades Council of Greater New York at the groundbreaking ceremony.

“This long-awaited project couldn’t come soon enough for the people of Queens, as it will create exactly the right kind of jobs—good-paying, stable and local—that are in such high demand throughout this neighborhood,” said State Senator Joe Addabbo (D- Howard Beach).

Assemblywoman Audrey Pheffer (D-Ozone Park), who vigorously worked to save Aqueduct and get the racino project started, is thrilled that the long journey is over, and she looks forward to working with Genting. “It’s been a long road, but it was one that is going to prove better, and better then we ever dreamed of,” she said.

City Councilman Eric Ulrich (R-Ozone Park) said he looks forward to working with the company to ensure that the tradition of horseracing continues in Ozone Park. “Today marks not only a groundbreaking for the new Aqueduct Racino, but also a new beginning for the community,” he said. “Genting’s redevelopment of this site will revitalize the area, create new jobs, and bring millions of dollars in tax revenue to both the city and state.”

Genting has cleared all environmental hurdles, meaning construction can begin “within a matter of days,” according to Medenica.
Posted by The Forum Newsgroup at 1:01 PM