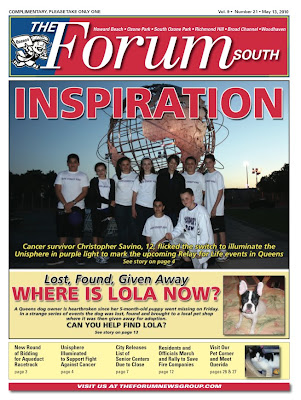 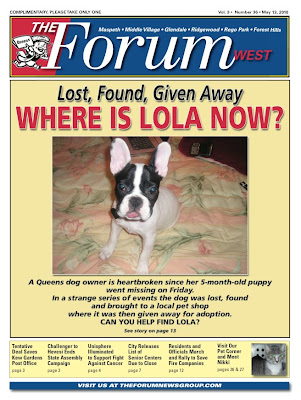 Posted by The Forum Newsgroup at 4:50 PM No comments:

Residents in Kew Gardens are relieved to hear a tentative deal has been struck to keep the neighborhood post office branch open, but they won’t be comfortable until details of the new lease agreement are officially announced.

“We’ve been concerned for the last four years, ever since we discovered the property didn’t belong to the government, and the developer who bought the property intended to put up an apartment house,” said Murray Berger of the Kew Gardens Civic Association.

In 2006, the property owner and United States Postal Service agreed on a five-year lease that included three guaranteed years and an option to extend the lease an additional two years to 2011. But, after hearing the option was picked up, residents didn’t hear any additional updates on the situation in the past few years.

Last week, Rep. Anthony Weiner (D-Forest Hills) announced that a tentative deal had been reached that will allow the post office to remain open. “This is a huge victory for Kew Gardens. No community should be forced to live without such a vital service, and I’m pleased that everyone involved in the process understood that,” he said.

However, the congressman’s statement only said that “both the USPS and building owner appear to have come to an agreement that will save the post office.” His office did not respond to a message seeking additional details on this agreement, including how many years the new lease covers.

Weiner and Senator Charles Schumer wrote letters to the Postmaster General in March 2009 asking that postal officials ensure that the Kew Gardens branch, located at 83-30 Austin Street, would stay open. The USPS has not included Kew Gardens on recent lists of branches being considered for closure as part of the agency’s cost-cutting measures.

On Tuesday, Berger said the civic association has only heard that a verbal agreement had been reached on a new lease, but hadn’t learned of the specific details. “We’re trying to be flexible, but there is no other place in the neighborhood for a post office,” he said, adding that it has been “part of the infrastructure of Kew Gardens” for 60 years.

One complicating factor is that the USPS has been paying $167,000 annually to property owner Tulip Management to lease the building, which is the highest rate paid among area post office branches. While the property was downzoned in 2005, residents still worry the owner will seek a variance allowing an apartment building to be constructed on the site, said Berger.

Losing the post office would be detrimental to the community, which includes many senior citizens and many foreign-born residents who need access to passport services. Residents would be forced to trek to Main Street in Briarwood or Metropolitan Avenue in Forest Hills for postal services, likely leading to longer lines in those neighboring branches. “None are within easy ambling distance for the young and old,” said Berger.

“We’re waiting to hear what the details are,” said Berger, who serves as the civic association’s executive director. “Having lived 86 years, I’m an optimist so I have to assume it will go through, but I would feel a lot better if I knew it was signed... As I’ve been saying, other communities have ‘Save our firehouses’ and we have ‘Save our post office.’”
Posted by The Forum Newsgroup at 2:05 PM No comments:

Assemblyman Andrew Hevesi’s bid for re-election got much easier last week with the announcement that one of his Democratic challengers has abruptly ended her campaign.

Lilianna Zulunova, a 27-year-old adjunct professor at LaGuardia Community College, said in a statement that she is prematurely ending her bid to unseat Hevesi (D-Forest Hills) in the 28th Assembly district due to her May 3 marriage.

“As some of you know, on May 3 I got married to Rabbi Emanuel Yelizarov. This is an exciting time for my family and me,” said Zulunova in a statement released last Thursday. “It’s with this in mind that I have decided to put my family first and end my campaign. My obligations as a wife, and eventually as a mother, give me certainty that this is the right decision for me at this time.

When she announced her intentions to run for the Assembly earlier this year, Zulunova was critical of Hevesi due to his family’s political connections. “My opponent has had everything handed to him on a silver platter,” she wrote in a February e-mail to supporters. “He’s never had to work for anything in his life. Well, he’s going to have to work this summer.”

She added, “While my opponent has rubbed elbows with Albany elites and padded his campaign coffers with pension fund monies, I helped seniors get tax exemptions. I helped families stay in their homes and helped immigrants get the services they need to succeed as Americans.”

Zulunova vowed to stay involved in local issues moving forward, despite abandoning her campaign. “I still have a passion for public service. I still yearn to serve my neighbors and my community. And I will devote my time to giving back to Queens and the neighborhoods that have given me so much,” she said.

Hevesi was first elected through a special election in 2005 after former Assemblyman Michael Cohen resigned from office. Since then, Attorney General Andrew Cuomo has launched an investigation into corruption involving the state pension fund during the time Andrew's father, Alan Hevesi, was state Comptroller. Former Liberal Party chairman Raymond Harding has admitted to ensuring that the Assembly seat became vacant in exchange for $800,000 in illegal payments.

Andrew Hevesi, who Cuomo has said was unaware of the political maneuvering that took place on his behalf, will still have at least one Democratic challenger to contend with. Joe Fox, an attorney who has lived in Forest Hills for 30 years, announced his intention to run last month.
Posted by The Forum Newsgroup at 2:00 PM No comments: