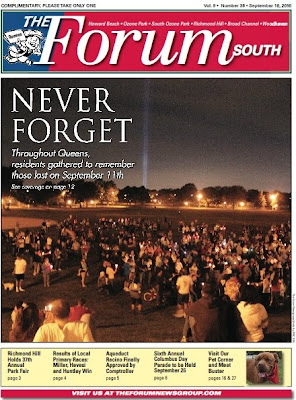 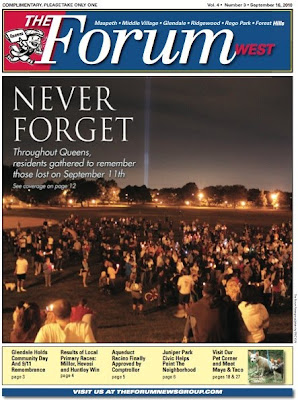 Posted by The Forum Newsgroup at 11:20 AM No comments:

Voters had to deal with new machines, but it didn’t stop them from heading out and voting on primary day.

Many voters experienced problems with the new machines, and Mayor Bloomberg publicly criticized the city Board of Elections for the mishaps. The BOE said they would look into the problems and attempt to fix the problems before November’s general elections. In addition, City Council Speaker Christine Quinn said hearings on the issues will be held in the coming weeks.

State Senator Joe Addabbo (D-Howard Beach) who is the chair of the elections committee released a statement addressing the issues. “I intend to discuss with the Board of Elections the issues and concerns expressed to me by voters and poll workers regarding the new voting machines used on Primary Day,” he said. “Now we must find practical solutions so that our voters have an efficient and reliable General Election in November."

“I am humbled by the outcome of last night’s primary elections, and I thank the voters of my district for once again honoring me with their support,” said Hevesi. “ In advance of November’s General Election, I will, as always, be talking to the residents of the 28th Assembly District about how we can work together to address the issues that impact the lives of our families and our community.”

"I am grateful for all my supporters who came out and voted to re-elect me to continue the work I began in the Senate,” Huntley said. “We have proven that there is strength in numbers, and our strength was solidified by a grassroots campaign rooted in integrity, backed by concrete work experience and driven by results.”

Finally. After more twists and turns than a daytime soap opera, Aqueduct racetrack finally has a vendor to develop and operate video lottery terminals (VLT) at the facility. State Comptroller Thomas DiNapoli approved Genting New York’s proposal on Monday, paving the way for construction to begin at the Ozone Park facility.

“This is one of the most important vendor contracts New York has ever signed,” DiNapoli said in a statement. “The VLT contract involves hundreds of millions of dollars. It’s a 30-year license that carries the future of New York’s racing industry on its back.”

The contract will do much more than help the New York Racing Association (NYRA). Genting New York’s proposal calls for the creation of approximately 1,300 construction jobs and 800 permanent jobs. Furthermore, in a meeting with Community Board 10 in July, the company promised to spend over $30 million in local goods and services, and they plan to donate one percent of net profits to community groups.

Jobs were definitely on the community’s mind as the proposal was being discussed. “We look forward to working with Genting to bring much needed jobs to our community and ensuring the casino project is a successful one that enhances the whole com- munity” said Betty Braton, Chair of CB 10.

Genting New York is a subsidiary of Genting Berhad, one of the world’s largest resort and casino companies. They currently operate Asia’s largest casino in Malaysia. This will be Genting’s first foray in America, but their management and construction team has years of experience with Foxwoods Resort in Connecticut and the casino at Saratoga Springs.

Genting’s plans include approximately 4,500 slot machines, a 200-seat restaurant, a high-
end Chinese restaurant and other entertainment amenities. The proposal also included a $380 million upfront payment to the state. Once construction begins, Genting hopes to be able to open within six months and completely finish construction in 18 months.
Posted by The Forum Newsgroup at 11:07 AM No comments:

Email ThisBlogThis!Share to TwitterShare to FacebookShare to Pinterest
Labels: genting

It won’t take affect for two years, but students in New York will have safeguards to protect them from bullying and harassment. Governor Paterson recently signed the Dignity for All Students Act, which allows the “commissioner of education to establish policies and procedures affording all students in public schools an environment free of harassment and discrimination,” according to the bill’s legislative summary.

The bill, which was introduced by Senator Thomas Duane (D-Manhattan), had almost universal support. It passed the Senate in a 58-3 vote and the Assembly in a 138-4 vote.

The Dignity for All Students Act would prohibit harassment or discrimination against students on school property or grounds. Harassment is defined as the creation of a hostile environment by conduct, verbal threats, intimidation or abuse that has or would unreasonably interfere with educational performance.

“This law exemplifies our commitment to providing all students with a safe learning environment,” said State Senator Joe Addabbo (D-Howard Beach), a prime supporter of the new law. “I am proud to support this legislation. Incidents of harassment and intimidation should not be tolerated in our schools.”

According to a 2008 survey cited in the bill, 15 to 20 percent of the U.S. student population is a victim of bullying. In a 2005 study cited by Addabbo, 39 percent of New York students reported bullying and harassment is a serious problem and 66 percent of students claimed they were harassed because of their looks.

The law also provides provision for the state Department of Education to provide training to school staff to foster a safe environment and dictates that incidents of harassment are reported at least once a year.
Posted by The Forum Newsgroup at 10:56 AM No comments:

Foundation president, Mario Faulisi, says the parade is something the community is really looking forward to, especially with two longtime Howard Beach residents among this year’s honorees. “We are very proud of the accomplishments of all our honorees. Each of them has done much to preserve the Italian culture.”

This year’s female grand marshal is lifelong Howard Beach resident Tracy Catapano-Fox. Ms. Catapano-Fox is the president of the Queens County Women’s Bar Association and currently works as the Chief Law Clerk to the Administrative Supreme Court Justice Jeremy Weinstein. She shares her Howard Beach home with husband Charles Fox and their sons, Benjamin and Ethan.

Joseph Sciame, this year’s male grand marshal, is the vice-president for community relations at St. John’s University and President/Chair of the Board of Directors of the Italian Heritage and Culture Committee, Inc. of New York. Mr. Sciame he also has been recognized by the Holy Father as a papal Knight of the Equestrian Order of the Holy Sepulchre with the Grand Cross.

Joseph Evola, owner of Gino’s Ristorante and Pizzeria, is being honored as the Italian
American Businessman of 2010. Mr. Evola immigrated to the United States in 1967, at age
seventeen from Palermo, Sicily. Seven years later he became a part owner in a small pizza shop and has worked tirelessly to achieve the American dream. He and his wife of 35 years, Fara, have two children, Jack and Margaret.

The HBCDF was founded in 2005 to foster and promote the preservation of the Italian language and culture. Its annual Columbus Day Parade has quickly grown to be the second largest of its kind in New York State.

Three years ago, the Foundation developed the Italian Language Study Program. The program offers free instruction of the Italian language to local residents and students and has already seen more than 200 community residents complete their course of study.

All are welcome to attend the parade and watch the floats arrive at the traditional red carpet show featuring CBSFM’s Joe Causi along with DJ’s Jack of Satisfaction Guaranteed and Nicky Guida of 2 PLUS 2 Entertainment with special appearances by surprise guests. A mini-feast with food and novelty vendors will be set up at the end of the parade route.

The Foundation has continued to raise funds for many charitable causes including the American Cancer Society and the Juvenile Diabetes Research Foundation. In addition, it has developed scholarship award programs for local students of Italian-American descent who excel in the arts, academics and athletics.

To request further information contact the Howard Beach Columbus Day Foundation at 718.641.3469
Posted by The Forum Newsgroup at 10:50 AM No comments:

The city Taxi and Limousine Commission (TLC) began its Group Ride pilot program on Monday, which allows privately run commuter vans to operate on some of the bus routes that were eliminated or reduced by the Metropolitan Transportation Authority (MTA) during the last round of service cuts.

The vans cost $2 and MetroCards are not accepted. Proper vans will be clearly marked with “Group Ride Vehicle” on the exterior and will have identifying decals inside the van. Pick-up and drop-off locations will be clearly marked by Department of Transportation signage. Passengers may also request to be dropped off along the route if the drivers agree.

“The purpose of this program is to provide safe and reliable service in areas that have been impacted by the MTA’s service disruptions, some of which were already challenged by limited transportation options,” said TLC Commissioner David Yassky. “This is an exciting opportunity for the TLC to help introduce and test an entirely new kind of service that never before existed—one that we believe will help thousands of people get where they need to go in a safe and convenient way.”

Based on the results of the pilot program, additional vans might be put into service in other parts of Queens.
Posted by The Forum Newsgroup at 10:46 AM No comments:

These days, men and women have all but stopped wrestling with each other to gain control of the TV remote—that’s because they’re all tuning in to watch whatever’s on the Food Network. As for print media trends, current magazine subscriptions show an incredible boost to publications catering to readers interested in food, wine, menus, recipes, table settings and desserts.

Many of today’s celebrity chefs delight in presenting their creations and showing us just how to mimic their offerings to thrill our own dinner guests. And although Executive Chef Michael DeGeorgio may be a just a few steps away from celebrity status, he is certainly developing a devoted following of food groupies at his newly introduced cooking demonstrations held at Vetro Restaurant and Lounge in Howard Beach.

The first in the series of what has been billed as “intimate cooking classes” debuted at the restaurant back in July, when DeGeorgio prepared a menu of summer appetizers featuring three cold appetizers: homemade mozzarella roulades, filet mignon "carpaccio" and shrimp salad "Murano," followed by a trio of hot appetizers: stuffed chili peppers, chicken meatballs with fresh fava beans and Chilean sea bass skewers.

A second class at the end of August was dedicated to summer entrees: blue claw crab sauce with linguine, pollo alla barese, pistachio crusted Florida grouper and medallions of filet mignon with fresh corn sauce. DeGeorgio really made points with a sold out class of eager students when he wrapped up the presentation with cold zabaglione with fresh fruit.

One of the unique components of the Vetro Cooking Series is that DeGeorgio tries to pass on to his students a certain confidence in the kitchen—stressing repeatedly that no one should be married to a cookbook. “I want you to understand the methods,” he tells his students. “That is what’s important. A cook should always be able to add themselves to the whole experience. As long as you know the method you are free to create wonderful dishes.”

And those wonderful dishes created by the graduate of the Culinary Institute of America are not only brought to his students with recipes and demonstrations—they are beautifully plated and served during the class. Also included, a wine tasting that offers cooks appropriate pairings for each dish prepared in class. Among the upcoming class schedule will be the classic Italian Sunday table.