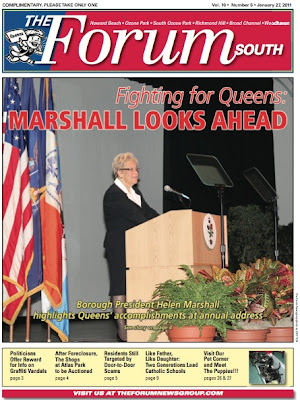 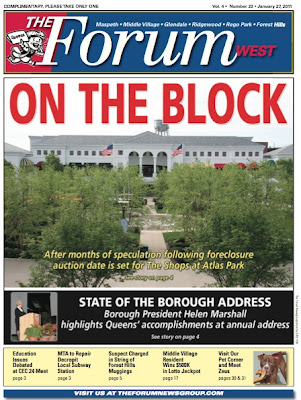 Posted by The Forum Newsgroup at 11:21 AM No comments:

Marshall Touts Progress in State of the Borough Address

Economic progress is still slow throughout Queens, but Borough President Helen Mar- shall said strides are being made to keep the borough thriving.

At her State of the Borough Address, Marshall focused on the work she’s accomplished over her last two terms and promised to keep progress moving forward.

“I look forward to completing projects and building new communities in my third term,” Marshall said.

Marshall focused on several key initiatives. She said she believes education is paramount to the borough’s success and praised the openings of several new schools. “PS 13 in Elmhurst opened a new annex,” Marshall said, “and PS 273 opened its doors with 379 seats in Richmond Hill.”

New schools in the area that opened this year includes the newly opened Metropolitan Avenue campus in Forest Hills, and the new Maspeth High School is currently under construction.

Marshall has also worked to improve the infrastructure in Queens. Last fall, the state Department of Transportation broke ground on repairs to the Kew Gardens Interchange— one of the most congested areas in the city where the Van Wyck Expressway, Jackie Robinson Parkway and Queens Boulevard all meet. Marshall has also pushed the city to fix sewers around Queens, specifically to alleviate flooding in areas like Broad Channel.

Through her tenure as Borough President, Marshall has allocated more than $354 million to libraries, parks, cultural institutions and historic houses. But Marshall blasted the way the city allocated money for libraries. “Last year, each and every branch in Queens received $77,000 less than Brooklyn branches,” she said.

At her address, Marshall asked Queens Council Members to draft legislation to fix the inequities in library funding. “This is not a borough against borough war,” Marshall said. “This is a matter of fairness.”

Ten senior centers have closed in Queens, and more cuts are on the way. Marshall promised to do everything she could to provide services for seniors. “Believe me, we will continue to fight these cuts.”

“We’re very grateful to Ms. Marshall, and our other elected officials, for coming together and crafting a plan that not only helps our seniors, but also benefits the volunteer ambulance corps at the same time,” said Ed Wendell, president of the Woodhaven Residents Block Association. “It’s a win-win scenario for the residents of Woodhaven.”

Marshall has also been dedicated to funding parks. She has allocated more than $140
million for park projects. Her funding has helped renovate the bandshell in Forest Park and a new baseball field and cricket pitch was unveiled at Southern Fields in Ozone Park.

Betty Braton, chairwoman of Community Board 10, was grateful for Marshall’s help. “We look forward to her continued support of park projects in our area,” Braton said.
Posted by The Forum Newsgroup at 11:18 AM No comments:

The story of a mall plagued with financial woes and empty stores may soon have a new chapter. The Shops at Atlas Park, an open-air shopping center on Cooper Avenue in Glendale, is up for auction on January 28 after more than two years in foreclosure.

Credit Agricole Corporate and Investment Bank, the New York branch of French-owned financier Société Générale, foreclosed on Hemmerdinger’s property in January 2009. The bank is likely preparing to unload their investment at a significant loss.

According to the legal notice of auction, the foreclosure debt was over $119 million by June 2010. And when at least two real estate firms were considering purchasing the mall in September, speculation put the buying price of Atlas Park as low as $50 million. Société Générale spokesperson Jim Galvin declined to comment.

According to Vincent Arcuri Jr., chair of Community Board 5, one of those companies met with community representatives while in negotiations. The firm, Chicago-based McCaffery Interests Inc., specializes in underperforming urban real estate, but eventually decided against the investment.

"We thought there was an ability to fix it,” Daniel McCaffery, president of McCaffery Interests, said to Retail Traffic. “But negotiations broke down."

Arcuri said he hopes whichever company wins the auction on Friday will pay attention to the community when deciding how to revamp Atlas Park.

Hemmerdinger’s original plan for Atlas Park called for an upscale center that would attract
the wealthier shoppers of Manhattan and nearby Forest Hills. With poor access to the highway and shops that weren’t geared toward the surrounding community, Atlas Park failed to draw targeted crowds and alienated nearby Glendale residents.

While bolstering mall patronage was unsuccessful, it wasn’t for a lack of effort. Several buses were rerouted to connect with the property while Hemmerdinger’s father Dale was serving as MTA Chairman. But rather than attracting new patrons, the buses have been blamed for rising traffic congestion in the area.

Hemmerdinger even once ran a promotion at the Atlas Shops where he gave away $20,000 to mall shoppers. He handed out $1 bills and $1,000 prizes, calling himself a friend of the economy. The effort proved insufficient to promote an ongoing client base that would have prevented Atlas Park’s foreclosure.

After ATCO lost Atlas Park to foreclosure, a series of managers were brought in under the leadership of Societe General. The first replacement for the Hemmerdinger’s was the Mattone Group, and the most recent is CB Richard Ellis. None of the management groups have been
able to garner wide public support. “The management hasn’t been that good, because the bank has had complete control and has been calling the shots,” Arcuri said.

The community and politicians have floated several ideas about what should be done with Atlas Park, such as bringing in a supermarket like Target or Wal-Mart, or even opening space for City University of New York classes.

"Atlas Park has the opportunity to serve as a positive economic engine for Queens and our city’s small businesses—but its value is dependent on its management," said Crowley. "I look forward to working with the new owner of Atlas Park to make sure this shop- ping center works with the community and the residents I represent."
Posted by The Forum Newsgroup at 11:14 AM No comments: 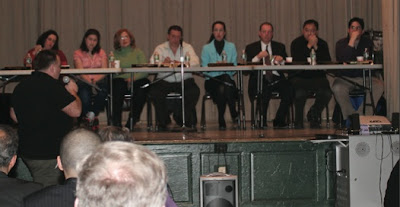 Parents let city Department of Education (DOE) officials know they were not happy with the direction the city is taking regarding enrollment and rezoning at this month’s Community Education Council (CEC 24) meeting.

It was a full agenda, and the meeting started with Bonnie Gross and Xinpei Qu from Stu- dent Enrollment. Gross alerted parents that 8th graders who took the specialized high school exam to enter schools like Stuyvesant or LaGuardia will receive their results and placements around February 10. By March 25, everyone will begin to learn their high school matches, Gross said.
CEC 24 President Nick Comaianni asked the enrollment officers to do a better job of including Superintendent Madelene Taub-Chan in the decision making process. “You should check with the superintendent before enrollment decisions are made. She should not be alerted after the decision,” Comaianni said.

Qu told the board that the superintendent is an integral part of their decision process. Gross also said if there is a communications breakdown they will review and fix the problems.

Parents let Gross and Qu know that more seats needed to be added for the gifted and talented programs. Most elementary schools in Maspeth including PS 153 are kindergarten through sixth grade. Therefore, students who test and qualify into the “Beacon” program in 5th grade face a difficult decision: switch schools to enter the program from 6th through 8th grades or enter the program in 6th grade and hope there is a spot for 7th graders the following year.

Charlie Vavruska, president of the Beacon Parents Forum, said they were guaranteed spots for their kids in 7th grade, but now they are being told there are only a handful of seats available.

“My daughter is in 5th grade at PS 153,” Vavruska said. “I’d like her to stay and graduate with her class.”

Parent after parent pleaded with the DOE to add extra seats to the program.

Another controversy arose at the meeting when Alex Shub from the Division of Portfolio and New Leaders presented the proposed principal of Maspeth High School. Shub said Khurshid Abdul Mutakabir was the most qualified leader out of the 200 candidates the department interviewed.

“This is a community concerned about their children,” Mutakabir said. “I proposed a straight forward school with a language arts focus. The top goal is to send kids to top universities.”

However, the board and parents felt Mutakabir’s introduction to the community felt disingenuous. A similar introduction of proposed leaders for the Metropolitan Avenue high school saw the DOE bring several candidates for public meetings.

“It feels as if this guy was just hand picked and we have no say in the decision,” one parent said.

Finally, the board passed a resolution approving Portfolio’s “step zoning” proposal that was introduced last week. IS 119 was ex- panded to kindergarten through 8th grade, so
a new zone needed to be introduced. When creating the zone, Portfolio wanted to alter several other zones to alleviate overcrowding.

However, at last week’s meeting at IS 119, parents strongly opposed the move and asked the department and the board to reconsider the proposal.

Board member Brian Rafferty understood the objections to the project: “I don’t think it’s necessarily the best solution. But it is a solution,” he said, and voted for the proposal.
Posted by The Forum Newsgroup at 11:11 AM No comments: 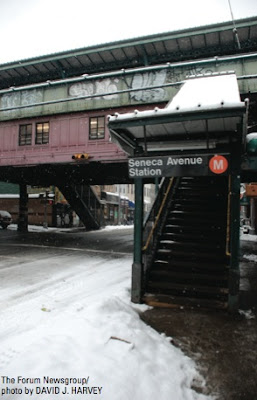 One of Ridgewood’s worst train stations, along with several other stations in Queens, will be repaired over the next three years, according to the Metropolitan Transit Authority (MTA).

The Seneca Avenue stop on the M train was rated as the worst station in the city by MTA’s internal reports. In 2009, MTA engineers graded each station looking at the condition of interior and platform stairs, walls, floors and ceilings. These components were graded on a scale of 1-5 (five being the worst), and the Seneca Avenue stop scored a 3.5 in each category.

The station was included as part of the MTA’s 2010-2014 capital program for station renewal, MTA spokesperson Deirdre Parker con- firmed. According to Parker, the station renewal is in the design phase and construction is tentatively scheduled for October 2011.

According to the New York Daily News, other stations in line for repairs are Fresh Pond Road and Forest and Knickerbocker and Central Avenue on the M line. On the A line, the 80th, 88th, 104th, 111th, Rockaway and Lefferts boulevards stations will be renovated.

In all, the MTA’s station renewal project will repair 25 stations and cost $375 million dollars.
Posted by The Forum Newsgroup at 11:10 AM No comments:

Forest Hills and Kew Gardens residents were fearful when they learned a mugger was targeting women in the area, but police report an arrest has been made in the case.

Since the beginning of the year, police said a mugger targeted women and used physical force to steal their property. In all, ten rob- beries were reported—six cases occurred within the 112th Precinct.

Castro may be able to breathe a sigh of relief. On January 21, officers arrested Brian Rodriguez, 33, of Nassau County for the incident on 64th Avenue and 102nd Street and the incident on 62nd Drive and 98th Street. He has been charged with second-degree robbery in both cases. The investigation is ongoing, but residents hope this is a major break in the case.
Rodriguez was allegedly working with an accomplice during the crimes. Anyone with additional information in regards to these incidents is asked to call Crimestoppers at 1- 800-577-TIPS (8477). All calls are confidential.
Posted by The Forum Newsgroup at 11:08 AM No comments: