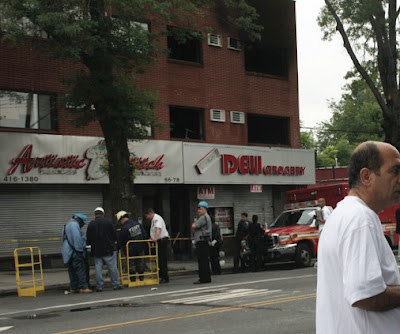 The fatal fire at a 69th Street apartment has now killed four people, and investigators are looking into whether it started after a woman doused her ex-boyfriend with a flammable liquid.

Three members of one family were killed in the fire, which broke out in the early morning hours on Sunday in the three-story apartment building at 69th Street and Metropolitan Avenue. Last Thursday, a fourth person, 31-year-old William Salazar was pronounced dead at New York Presbyterian Hospital. Four other, including Agnes Bermudez, 48, who is described as Salazar’s ex-boyfriend, were injured in the fire.

It was deemed suspicious by arson investigators almost immediately after it was brought under control, based up on a liquid pattern found near the second floor apartment’s door. Witnesses reported hearing Bermudez yelling, “Just kill me!” before the fire broke out, a claim that investigators are still looking into.

Investigators have been unable to speak with Bermudez, a former stock trader, due to her condition at Jacobi Medical Center in the Bronx. As the fire engulfed the building, which houses a deli on the ground floor, Bermudez and Salazar came running out engulfed in flames, according to witnesses who helped douse them with bottles of water.

Killed in the fire were family members who lived in the third-floor apartment above Salazar: Heriberto Garcia-Vera, 68, his wife, Flor Sandoval, 48, and their son Felipe Garcia Vera, 20. All three died of smoke inhalation and burns; Sandoval and her son were pronounced dead at Elmhurst Hospital Center, while Garcia-Vera died at the scene. Another of the couple’s sons, 22-year-old Daniel Garcia, survived the blaze.

Authorities on Monday determined the cause of the fire to be arson, meaning the deaths are now classified as homicides. Sandoval, a native of Colombia, was a makeup artist who boasted an impressive list of film and television credits, including work on the critically-acclaimed 2004 movie Maria Full of Grace, which told the story of a young woman’s trip to New York as a drug mule.

Authorities are now looking into whether Bermudez, who suffered burns over half her body, accidentally also doused herself with the flammable liquid, which may have been used by Salazar in his work as a carpet cleaner. Investigators are trying to determine if she instead meant to commit a murder-suicide. The two had reportedly broken up after dating for several years and were still on good terms.

It is unclear whether investigators were able to discuss the events leading up fire with Salazar before he passed away last week. While one published report stated that Salazar revealed to investigators as he was dying that Bermudez had doused him with the flammable liquid, another quoted the NYPD’s chief spokesman as saying that investigators never got the chance to interview him.

After the fire began, witnesses watched in horror as several people jumped from apartment windows in a desperate effort to escape the flames. Under New York City building codes, the apartment house was not required to have fire escapes or sprinkler systems, leaving some residents unable to get out due to where the fire began.