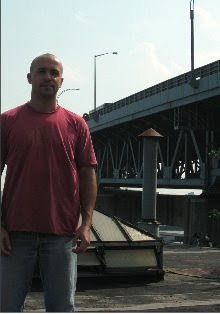 MASPETH -- The state has decided to replace the aging Kosciuszko Bridge with two parallel structures, but the effort has once again been delayed, to the frustration of property owners being forced out for the project.

Businesses and homeowners that will be displaced were informed that the project has been delayed for about two months so that the federal government can review the project’s timeline and costs, according to the state Department of Transportation.

The latest bad news for property owners comes after the project was already delayed for six months by the Historic Preservation Department, which had argued that the aging span carrying the Brooklyn Queens Expressway over the Newtown Creek between Maspeth and Greenpoint should be saved.

When breaking the news of the delay to business owners, state DOT officials were able to inform them that a decision has been made regarding the new structure’s design. It is expected to cost $630 million to demolish the existing structure and replace it with two parallel bridges. The construction phase is expected to begin in 2011 and take about five years to complete.

The plan is to build a four lane span, demolish the existing bridge, and then complete the second span. For the several dozen businesses and three homeowners that must move to make way for the project, the latest delay is beyond frustrating. George Kosser, vice president of Karp Associates, said the news is “very difficult on us and upsetting” because it has prevented them from purchasing a new piece of land elsewhere. “For the past 18 months we have been looking for buildings,” he said. “We recently found one that is a good fit, but we can’t move on it.”

According to the state DOT, the current delay is due to federal regulations requiring that state projects costing at least $500 million must under go a “risk assessment.” The federal review is expected to take place by the end of this week, in hopes that DOT can submit its formal plans to highway officials in Washington.

"It was unexpected," said state DOT spokesman Adam Levine. "We had spoken with the New York division office of the Federal Highway Administration, which said it wouldn't be a requirement, but the Washington office stepped in and said we have to."

The feds first told the state DOT that the study couldn't take place until October, but then agreed to perform it immediately, according to Levine. "We told them, and the division office told them that it is unacceptable because we are so close to completing the environmental study. It could have been worse, but it still is not anything we're pleased with."

With 100 employees, Karp Associates, which has been in Maspeth for 52 years, is the largest of the companies being forced to move. Before the project was announced, the company purchased additional land near its current location at the foot of the bridge so that it could expand its operations. “We had already hired an architect over four years ago, and then heard about the potential for the project and put everything on hold,” said Kosser. “We’re overcrowded beyond belief internally, and it’s hurting us.”

The problem now is that Karp can’t move ahead with a purchase of new land until it is assured that the project is moving forward, otherwise the funds currently earmarked to relocate businesses won’t be available. “Any risk that we take prior to the formal commitment from the DOT to us is strictly at our risk,” Kosser said. “If I go and buy a building and they don’t [move ahead with the project], I don’t have any recourse.”

Kosser indicated that any further delays might force Karp’s hand and force ownership to move ahead with the expansion project. That in turn would cost DOT money, as the amount they must compensate Karp for taking the land would increase. “I can’t stop forever,” he said. “We cannot continue down the path we have taken up until this point if the DOT can’t give us a firm date we can hold.”

The DOT says it sympathizes with the property owners and understands that “delay and uncertainty make it difficult to move forward with new leases.”

For Kosser and business owner Adam Gold, one positive of the whole ordeal has been the support it has received from the community. “We are overwhelmed,” said Kosser. “The residents and people from the community board literally stood up at meetings and told the DOT it was unfair what they are doing to Karp and other businesses. When [the process started], we thought for whatever reason that the community would never care about that happened to businesses. The community has been unbelievably supportive of our position, I can’t say that strongly enough.”
Posted by The Forum Newsgroup at 4:14 AM