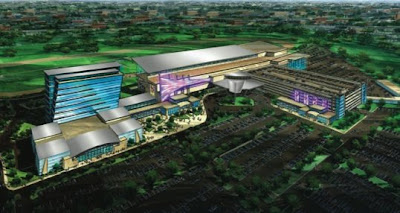 Representatives from the Delaware North Companies made their awaited presentation on the proposed gaming package for Aqueduct Racetrack on Thursday. Ron Sultemeier, Vice President of Strategic Development for Delaware North led the discussion and used a Powerpoint presentation to give board members and residents a clear picture of what the company intends to do at Aqueduct.

Sultemeier was joined at the Community Board 10 meeting by Dan Gerrity, President, Saratoga Gaming and Raceway and Saratoga Harness Racing at the meeting. Also on hand was Joanne K. Adams, the Community Relations manager from NYRA. For the project, Delaware North will team with Saratoga Harness Racing and other partners including the Peebles Corporation and McKissack & McKissack to form the Aqueduct Gaming LLC Operating Entity. Sultemeier began his discussion by emphasizing strong community involvement in the project to be accompanied by job and economic development. He also stressed the company’s commitment to focus on important aesthetic characteristics and very careful planning related to transportation, traffic and security. “The community has been waiting a long time for new development—our commitment is to build something you will be proud of,” Sultemeier said.

In addressing plans to deal with transportation and traffic issues related to the new facility, Sultemeier was very firm on the fact that every consideration will be taken to make sure that the utmost attention is paid to these components of the plan to avoid traffic congestion and all safety and security issues concerning transportation in and out of the facility. In total, Delaware North is intent on making a dynamic impact on the successful thoroughbred racing program and bringing great benefits to the community as a whole and the State of New York as a whole.

One point well made by the Delaware North representatives was that in the past, when record crowds lined the stands at Aqueduct, the facility saw many crowds numbering 50,000 or more. “This operation,” Sultemeier explained, “will see an estimated daily crowd of between 10,000 and 23,000, but those crowds will be spaced out through the day and night.

The focus of Aqueduct Gaming is to deliver world-class gaming and entertainment to Aqueduct Racetrack. In hopes of realizing the potential of the project quickly, all efforts are centered on beginning the generation of substantial revenue for the state as soon as possible through the use of the existing SEQR permit.

While the project would start out including the much talked about Video Lottery terminals, or slot machines, the overall vision is for expansion to a world class regional destination with hotel and conference facilities, restaurants, retail and entertainment options.

Development plans for such a facility would be integrated with transportation to provide seamless access to larger metro population and minimal impact to local traffic patterns. Specific features of the proposed Gaming and Entertainment would include a state-ofthe-art gaming floor with amenities expected as part of a regional casino destination, 185,000 square feet of gaming floor, approximately 4,500VLT’s, a 2,000-space parking garage and world class hospitality amenities.

Of primary concern to the Board and residents is the creation of jobs and revenue for the local community. Sultemeier offered a thorough explanation as to how the project will generate substantial revenue, jobs and overall economic development to benefit education while also supporting the thoroughbred racing industry.

“This project will create as many as 1,100 construction jobs and an additional 1,000 jobs at the gaming and entertainment facility. It is a $250 million project up front with a 30-year-franchise agreement,” said Sultemeier. “Over $170 million will be allocated to the facility alone.”

In addition to the creation of thousands of employment opportunities, Aqueduct Gaming will establish an employment and small Business Development Center which will host job fairs in coordination with local media outlets and community organizations.

While the primary focus of Aqueduct Gaming presently is to get things rolling with the state, there was also discussion about potential future operations that serve as naturally complementary to gaming operations including a resort hotel with 350-500 luxury rooms and a 3,000 to 5,000 square foot destination spa, a 15,000-30,000 square foot retail mall, additional restaurants, a 3,000 seat events center and a 60,000 square foot conference center.

To conclude the presentation, Ron Sultemeier outlined the next steps for an anxious audience. He said that immediate plans were to finish the final steps in the Memorandum of Understanding, begin the execution of a detailed development and construction timeline, establish the office/employment/small business center and very importantly to continue to build community partnerships. Once these remaining details have been settled it is expected that the actual construction phase will take 14 months to complete.

A mechanism is in place that will allow for community input as the project moves forward. Community Board 10 has designated nine community leaders to serve along with three representatives each from NYRA and Delaware North on the State Franchise Oversight Board’s Community Advisory panel for Aqueduct. In addition, Delaware North will be communicating with local groups on specific issues relating to the project as it proceeds.

“Delaware North has been forthcoming with information since their selection,” said Community Board 10 Chairperson Betty Braton following the meeting. “We look forward to the signing of the MOU with the State by Delaware North, and working with it to see Aqueduct become a much-needed economic engine for the region that enhances our local community at the same time."
Posted by The Forum Newsgroup at 1:30 PM

Read various, Left At The Gate, blogs, regarding this disgraceful sham.