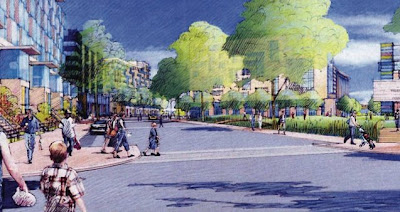 A group of Willets Point business and land owners is arguing that $400 million the city has set aside to redevelop the gritty industrial area near Shea Stadium could be put towards better use, given the current economic crisis.

During his most recent budget announcement, Mayor Michael Bloomberg announced that the city must take severe measures, including drastically cutting vital services, in order to balance the city’s finances. According to the group Willets Point United Against Eminent Domain Abuse, the $400 million set
aside by the city to acquire private property should be put towards better use to soften the blow of impending budget cuts.

“The taxpayer money set aside for property acquisition at Willets Point could easily be redirected towards these agencies to prevent these cuts,” said Jerry Antonacci, president of the coalition of business and land owners. “There would also be enough left over to install a sanitary sewer system to fix the roads at the Iron Triangle and allow the property owners to stay, expand their businesses and let the area redevelop naturally.”

Last November, the City Council approved a plan that would remove existing businesses from Willets Point and allow a private developer to build a convention center, hotels, retail and housing on the 64-acre site near the new stadium being built for the Mets. The city has said that, if necessary, it will use eminent domain to take possession of the private properties and then turn the land over to a yet-to-be-chosen developer.

Willets Point United Against Eminent Domain Abuse represents more than two dozen property owners who are fighting the city’s plan to acquire their property. Antonacci, owner of Crown Container, had reportedly struck a deal last year to sell his 23,000-square-foot property to the city. Under the agreement, the waste transfer company started by his father in 1959 would have moved from 34th Avenue in Willets point to a property in Maspeth. However, the deal was never formerly announced by the city and eventually fell apart last September.

“Why is there $400 million set aside to force business and property owners off their land while jobs for police, fire and teachers are being eliminated?” asked Jake Bono, owner of Bono Sawdust Supply Co. and a group spokesman. “Why in an economic downturn is the city spending money not only to destroy businesses and jobs, but to destroy the American dream of owning property? Government-abetted private land grabs were not what our founding fathers envisioned when they wrote the Constitution.”
Posted by The Forum Newsgroup at 11:00 AM