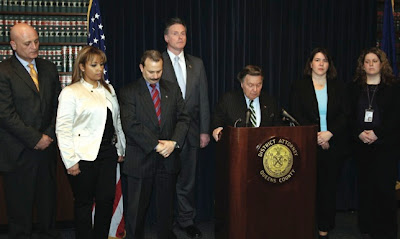 It took a jury less than one day to find a Forest Hills doctor and her distant relative guilty of conspiracy murder in the death of the woman’s ex-husband, who was gunned down in front of the couple’s young daughter following a bitter custody battle.

Mazoltuv Borukhova, 33, and her cousin by marriage, Mikhail Mallayev, 51, were found guilty on Tuesday of first-degree murder and second-degree conspiracy in the October 2007 shooting of Dr. Daniel Malakov following a five-week trial in Queens Supreme Court. The pair now faces up to life in prison when they are sentenced on April 21. 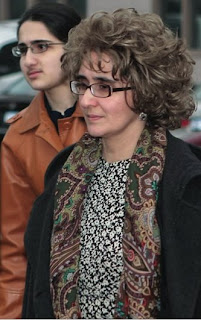 Malakov, 34, who had just won custody of the couple’s daughter, was fatally shot at pointblank range while bringing four-year-old Michelle to Annadale Playground to visit her mother. Jurors believed prosecutor Brad Leventhal’s contention that Borukhova paid Mallayev about $20,000 to murder Malakov, who had recently won custody of Michelle.

After the verdict was announced Tuesday afternoon, members of the victim’s family walked out of the courthouse with arms raised over their heads. One proclaimed, “God bless America.”

“They thought that my brother was their problem and they thought by eliminating him they could fix their problems,” the victim’s brother, Joseph Malakov, told reporters. “But what did she accomplish? She didn’t accomplish anything. She created all this unnecessary pain for everybody.”

Police connected Mallayev to the shooting after matching fingerprints from a homemade silencer found at the scene to his, which were on file from a previous arrest. In the three weeks leading up to the shooting, Mallayev and Borukhova had 90 telephone conversations, during which time authorities say they planned the murder. Following the murder, the pair met in Borukhova’s Forest Hills medical office before Mallayev deposited $19,800 into 10 different bank accounts.

Mallayev was arrested in November 2007 at his home outside Atlanta and Borukhova was charged in February after a grand jury charged both in the murder. “They are still living… but my son is not living. It is very hard for me,” said the victim’s father, Khaika Malakov said. “I don’t care about her life now.”

“Daniel Malakov looked to the law for justice when it came to gaining custody of his young daughter several years ago,” said District Attorney Richard Brown. “Today, the judicial system was there once again to ensure justice for Daniel as prosecutors made sure that those guilty of his murder were held accountable for their actions – actions that intentionally cut short a life filled with much promise and robbed a daughter of a father she hardly had the opportunity to know.”

During the trial, Borukhova testified in her own defense, maintaining that she did not hear the two gunshots, even though she was standing just ten feet away. Mallayev did not take the stand.

A major point in the case came when school teacher Cheryl Springfield testified that she saw Mallayev shoot Malakov while she was walking her dog near the park. She provided police with a description of the shooter, which was used to create a sketch, and then picked him out of a lineup before identifying him in court as the killer. Members of Borukhova’s family declined comment as they left the courthouse following the verdict.

In a press conference in his offices following the verdict, Brown touched on the strain the sensational case has had on the tight-knit Bukharian community of Forest Hills and Rego Park, and on the lasting impact the murder will have on little Michelle.

“Today’s verdict cannot heal the wounds suffered by the child – perhaps nothing ever can,” said Brown. “Nor can it heal those of the family of Dr. Malakov who lost his life so tragically. I hope, however, it that it will bring some closure to the Bukharian community and that it will enable them to begin to bridge the divide that has formed as a result of what has occurred.

“I believe that it is fair to say that justice has been served – although the child at the center of this case will probably never recover from having witnessed that which occurred or from the custody fight that to this day remains unresolved,” added Brown.

Following the murder of her father and arrest of her mother, Michelle has been placed in the care of a paternal uncle.

Photos by Michael O'Kane. Top: DA Brown discusses the verdict with reporters; while members of Borukhova's family leave court without comment (left).
Posted by The Forum Newsgroup at 8:10 PM

mazaltov borukhova how awful are you that your motherly instinct completely shutdown. How can you hate someone so much,, to hurt your child even more so. How can you disgrace our bukharian culture like that. What "dr" are you? you are nothing now.. and the best part is; you get to think about your actions for the rest of your life Doctor! so I guess you now you help yourself so called doctor. still upset -marina

Do you know her personally?