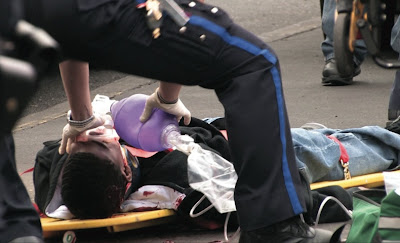 Police have announced an arrest in the fatal shooting of a 13-year-old on Linden Boulevard near a Queens high school.

Nnonso Ekwegbalu, 16, of 183rd Street in Springfield Gardens has been charged with second-degree murder, assault, criminal possession of a weapon and tampering with evidence in connection with the shooting last Friday. He was arraigned on the charges Monday in Queens Criminal Court and ordered held without bail. If convicted, he faces up to 25 years to life in prison and is due back in court on October 19.

Ekwegbalu is accused of shooting his weapon in front of 208-15 Linden Boulevard at about 3:15 p.m. in the direction of three unarmed teens with whom he had just been fighting. The three teens, who are known to the district attorney’s office, were running from the scene with the defendant opened fire. One of the bullets struck innocent bystander Kevin Miller in the head, killing him, and a second bullet struck an employee of a nearby car wash in the left thigh. Authorities say neither Miller nor the second victim were involved in the altercation. Ekwegbalu was arrested the following day by officers from the 105th Precinct.

“This case is another example of the mindless gun-related violence that too often takes innocent lives and recklessly endangers public safety,” said Queens District Attorney Richard Brown. “It is alleged that the 16-year-old defendant had an altercation with some other teenagers and fired a handgun, cutting short the life of an innocent 13-year-old child and injuring a second teenager.”

Both teenagers were students at Humanities and the Arts Magnet High School in Cambria Heights. Surveillance video showed that Miller, who just entered his freshman year, was struck while walking towards a nearby McDonalds restaurant. Ekwegbalu had no prior criminal record.

Mayor Michael Bloomberg, who has pushed for stiffer gun control laws, weighed in on the incident to reporters. “I don’t know when we’re going just as a society finally say enough is enough... I don’t know what we have to do to get people to understand guns shouldn’t be in the hands of children,” he said.

Miller died at Long Island Jewish Medical Center several hours after the shooting. The other victim, a 17-year-old, was treated and released from North Shore Hospital.