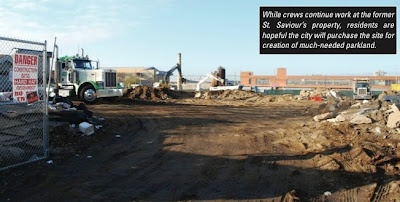 Maspeth residents and activists are hopeful that years of lobbying for parkland at the former St. Saviour’s will eventually pay off, now that several local officials have thrown their support behind the effort.

Borough President Helen Marshall and City Councilwoman Elizabeth Crowley are pursing the possibility of securing funding thorough the state Environmental Protection Fund to help pay for an acquisition of the lot near the corner of Rust Street and 57th Road. The property is currently empty, but is being prepared for future development should the owner, Maspeth Development, LLC, find an interested buyer.

The land was formerly home to historic 1847 St. Saviour’s church, which was designed by noted architect Richard Upjohn. In 2005, a Korean Methodist congre-gation sold the property to Maspeth Development for $4 million. The community fought the plan for residential development, and the owner allowed the Juniper Park Civic Association and other volunteers to dismantle the church building so that it can eventually be rebuilt on land donated by All Faiths Cemetery in Middle Village.

In the meantime, residents and activists including Christina Wilkinson of the Newtown Historical Society, haven’t given up the battle to have the land preserved for much-needed greenspace in that portion of West Maspeth. Wilkinson informed Marshall and Crowley of the Environmental Protection Fund opportunity, and the officials are responding with a letter the state Department of Parks and Recreation urging support for the endeavor.

“We’re looking to see if we qualify to get money from that state fund to acquire the land as parkland,” confirmed the borough president’s spokesman, Dan Andrews. In addition, Marshall has requested that the city Parks Department - which recently expressed a willingness to take title of the land if funds are secured to buy it - have a formal appraisal of the land conducted. While the city Parks Department is willing to take the land over, officials made it clear that funding for a purchase will have to come from other sources. “There is no city money to do it right now, but there is support for acquiring it as parkland, so obviously it is a question of money,” said Andrews.

The property is currently being listed by Manhattan-based Berko & Associates for $8.5million. This week, Joe Berko said the property owner would be willing to discuss a sale to the city at the right price. “Obviously, I don’t think anyone is looking to build right now, that is a well known fact,” said Berko. The owner acquired the land with the intention of developing the site, but “that is not happening right now,” said Berko.

Berko said there has been “some interest” in the site, including from firms seeking to lease the land to store equipment. “I think we have had communication with some members of the community, and if there is interest in the land, then absolutely” the owner would be willing to listen to offers.

Wilkinson said that while word that the Parks Department would take title of the land was encouraging, it set off an uphill battle to secure the funds. She first tried to arrange a land swap using land owned by the city elsewhere, but says the Bloomberg administration immediately ruled out that plan. She then came across the Environmental Protection Fund, through which money is provided to purchase space in neighborhoods that are underserved by parks, such as Maspeth.

“It sounded like a promising avenue to explore, and I contacted Councilmember Crowley and the borough president and they took it from there,” said Wilkinson. “A new park for Maspeth is something that the community has been looking forward to for a long time without much hope that it would happen because our elected officials in the past were not on board with the proposal,” she said. “It took the recent infusion of new political blood over the past year to give it some momentum.”

In her letter to the state, Crowley said the site “represents centuries of local history” dating back to when it was part of a Native American settlement along the Newtown Creek. It was part of the first European settlement in Queens when Maspeth was founded in 1642 by the Dutch and English. Then, 162 years ago, local congressman James Maurice founded St. Saviour’s Protestant Episcopal Church and donated the 1.5 acre property for the churchyard. Until last year, the site was home to 185 trees that helped buffer the residential blocks from the nearby industrial properties.

Crowley notes that while the mayor’s plan calls for every New Yorker to live within a ten minute walk of a park, Maspeth only has 12 acres of greenspace for more than 36,000 residents. The city calculates the ideal amount of open space to be 2.5 acres per 1,000 residents, meaning the neighborhood is vastly underserved, according to Crowley, who hopes to have other local officials sign on in support of the letter.

“The community very much would like to see this space opened back up to them,” she wrote. “Community members and groups already secured donations of trees, flowers and clean fill, but this working class neighborhood needs money in order to acquire the property.” She adds that there likely isn’t enough time for officials to raise the needed funds before the real estate market improves and the land is developed. “Should we miss this chance to create public parkland, another opportunity such as this will not likely present itself in our lifetime,” she added.
Posted by The Forum Newsgroup at 11:40 AM

What a great resource!