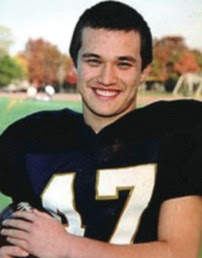 A 28-year-old Middle Village resident has pleaded guilty to manslaughter for drunkenly mowing down two young pedestrians last February while speeding through the neighborhood in a stolen car, authorities announced.

Kenneth Guyear, of 64-02 72nd Street, pleaded guilty last Thursday to first-degree vehicular manslaughter and faces the maximum allowable sentence - between seven-and-a-half and fifteen years in prison - when sentenced on February 23.

In pleading guilty, Guyear admitted to killing 16-year-old Robert Ogle (right) of 62nd Avenue and Alex Paul, 20, of Cypress Hills, on Feb. 1, 2009. The pair was walking to the Ogle home after attending a nearby party and was near the intersection of 80th Street and 62nd Avenue when they were struck.

Guyear later confessed to stealing a 2001 Kia that had been left idling with the key in the ignition outside a deli on Woodhaven Boulevard near Alderton Street. After stealing the vehicle, Guyear drove at a high rate of speed through the residential area until he struck Ogle and Paul, who were just blocks from their destination. He was stopped near Dry Harbor Road and Woodhaven Boulevard a short time later by officers who were canvassing the area following 911 calls reporting the struck pedestrians.

Police immediately noticed a strong odor of alcohol on Guyear and took him to the 112th Precinct stationhouse, where an intoxilyzer test showed he had a blood-alcohol level of.126. Guyear also admitted to police to having drank five or six alcoholic beverages and taking two Xanax pills before causing the wreck.

“The defendant has admitted his guilt to a terrible and tragic crime and will serve serious prison time, giving him time to reflect upon his reckless actions that resulted in the untimely death of two young men,” said Queens District Attorney Richard Brown. “This case once again underscores the impact of a person’s decision to get behind the wheel of a car while under the influence of alcohol.”

Following the tragedy, a bill pushed by Councilwoman Elizabeth Crowley (D-Middle Village) that raises the penalty for leaving a running vehicle unattended was signed into law. The fine, which was just $5 at the time, has since been raised to $250.

Ogle was a junior at Brooklyn Technical High School, where his mother teaches foreign language. Robert Ogle played football at Brooklyn Tech until breaking his leg during his freshman year, and previously played with the Pop Warner Queens Falcons team. An aspiring journalist, Robert also had a part-time job at the New York Hall of Science. Paul lived in Brooklyn and had met Robert that night at a mutual friend’s party.

Robert’s father, Brendan Ogle, said he has been in contact with Brown’s office and is “satisfied” with the plea bargain. While there were more serious charges that could have resulted in a longer sentence, there was also the chance Guyear could have been found guilty of a lesser charge. “We have no control over that and at least this gives it closure,” said Brendan. “I am relieved that this chapter ended. I can just go on with my life.”

According to police sources, Guyear has a long history of arrests and had been sent to Rikers Island eight times before the incident in Middle Village. His past charges include stealing a motorcycle while drunk on Atlantic Avenue in Brooklyn, and for robbery and assault after participating in a robbery during which the victim’s ribs were broken. He attempted suicide while in jail following his arrest for the Ogle and Paul deaths.

A civil suit filed by Robert’s parents against Guyear is still pending.
Posted by The Forum Newsgroup at 2:00 PM