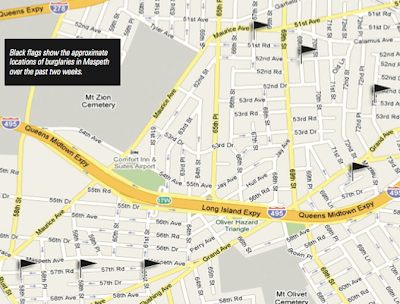 Residential burglaries are up throughout the precinct, including a huge spike over the past month - in part due to an apparent pattern in Maspeth.

The 104th Precinct has seen a 40 percent rise in home break-ins during the past 28-day period and an increase from 71 to 77 for the year to date, Captain Ray DeWitt reported at Monday’s COMET civic meeting.

There was good news in other major crimes last month, including decreases in robberies, assaults, grand larceny and auto thefts, according to DeWitt. However, burglaries con- tinue to be a problem through the precinct’s confines, and a pattern has been established by the NYPD in northern Maspeth.

“It’s throughout the precinct, all over and not confined to one neighborhood,” said Officer Tommy Bell of the precinct’s Community Affairs Unit. “But there is a pattern in the Maspeth area. They’re all so close to 73rd Street. We believe one person may be responsible for all those.”

There was one burglary between 7 a.m. and 3:30 p.m. on February 23 near 53rd Avenue and 73rd Street, when a number of items were taken, including jewelry and bags. The same afternoon, there was an unsuccessful attempt on the same block when a homeowner found a Hispanic man trying to pry his way into her home through a rear window.

There was also an assault during attempted burglary at 57th Road and 71st Street on the afternoon of February 20. The resident was home at the time and was punched in the face by the would-be thief. Civic member Mike Harte noted that it took police over an hour to respond to that incident, even though it was a crime in progress and the perp fled.

Officer Bell said the call was dispatched to the precinct as a past incident, meaning it wasn’t prioritized correctly. “The [investigation] process started when the officers got there, but obviously they should have gotten there sooner,” he said.

Many of the burglaries have taken place during daytime hours when the homeowner is at work, cautioned police. Other recent Maspeth incidents include:

February 23, a perp broke into a house near 67th Street and 51st Road after breaking a rear window.

Tools and copper were stolen from a construction site near 69th Place and 52nd Street during the daytime on February 19.

There has also been a recent string of break- ins in West Maspeth between Maurice and Grand Avenues:

A house near 59th Avenue and 57th Road was entered through a rear window between February 19 and 23rd, with unknown items taken.

While the precinct’s northern area has been hit especially hard lately, police say other areas of Ridgewood, Middle Village and Glendale haven’t been spared. The 104’s burglary stats took a huge hit last week, with nine on Monday and Tuesday alone, said Captain DeWitt. Of those, five were in Maspeth. There have been 19 burglaries overall in the past two weeks.

Areas hit in other neighborhoods include a break-in along the 500 block of Seneca Avenue, where a front door was pried open; a daytime burglary on 84th Place near 64th Road; and a burglary on Harman Street near Woodward Avenue while the resident was out for the evening.
Posted by The Forum Newsgroup at 7:45 PM