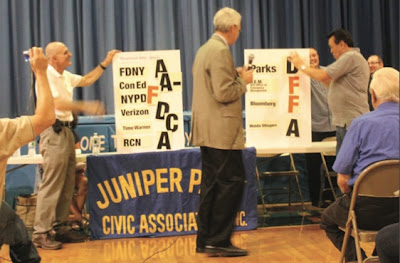 A week after a macroburst left a pile of trees and cracked sidewalks throughout Middle Village, residents attended this month’s Juniper Park Civic Association (JPCA) Town Meeting to get answers to pressing questions: when is the neighborhood going to be cleaned up and who is going to pay for it?

One city agency that was not represented by top officials was the NYPD. Deputy Inspector Keith Green and Officer Tommy Bell were at the meeting to represent the 104th Precinct, but Holden wanted someone from One Penn Plaza to answer questions about the lack of police presence and the order to send home 18 police officers from Middle Village after the storm.

Without those designations, Middle Village was left to handle the aftermath of the storm with little police presence. Many residents at the meeting noted they did not see any police officers that night.

The NYPD wasn’t the only department given a failing grade by the JPCA. In a vote held at the meeting, the city OEM and Mayor Bloomberg received an F grade for their storm response. Verizon and the Parks Department received a grade of D.

FDNY and Con Edison, however, were commended for their storm response and received top marks.

To address one of the most important issues for residents, Michael Aaronson, Bureau Chief of Law and Adjustment from the NYC Comptroller’s office told the community how to file claims with their office if residents chose to do so. The most important thing residents need to remember is to file the claim within 90 days. It is also recommended that any and all documentation, especially photographs, be retained.

There was some concern over how quickly claims would be resolved. One resident complained that a prior claim took countless phone calls and more than two years before he was reimbursed.

Although the storm occurred over a week ago, there are still plenty of dangerous areas that need to be cleaned. “There are big limbs hanging by a bark,” Holden said. Phil Sparacio from the Parks Department discussed these issues and told residents the Parks Departments plans to clear Middle Village.

Sparacio said the department’s first priority on Thursday night and Friday was to clear the major metropolitan streets. On Saturday and Sunday they worked with Con Edison to clear debris that was affecting power. On Monday and Tuesday they worked to clear all streets of trees and brush piles. In the next couple of weeks, they hope to remove brush piles and trees that are still blocking sidewalks or on homes.

The Parks Department understand there is much more work to be done, and Sparacio “understands the frustration” of the neighborhood. He reiterated that the department is taking the situation very seriously. All emergency contractors were activated after the storm, and they have requested and received help from adjoining counties in Westchester and Nassau.

Cleaning up Middle Village is going to be a long, hard and expensive process. There might be some relief if the area is declared a disaster area. FEMA and State OEM officials have begun a preliminary assessment of the damage the storms caused, and if the designation is made, federal and state funds could be given to help.
Posted by The Forum Newsgroup at 10:03 AM

Email ThisBlogThis!Share to TwitterShare to FacebookShare to Pinterest
Labels: JPCA