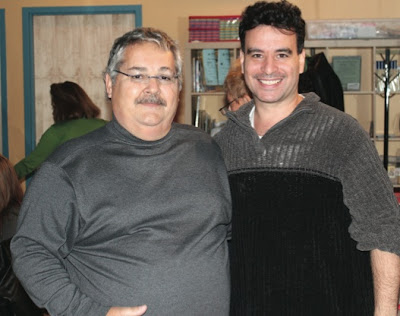 Philip Felice is depending on the kindness of strangers to save his life. In 2007, he was diagnosed with lymphoma and was successfully treated through a combination of chemotherapy and stem cell transplants. Unfortunately, in February Philip’s lymphoma returned, and his only hope for survival might be a bone marrow transplant from a stranger.

Blood cancers like lymphoma affect over 100,000 people a year, according to the Leukemia & Lymphoma Society. The society estimates that 54,020 people in the United States will die because of blood cancers.

A stem cell transplant is an important treatment for those suffering from blood cancers like Philip’s. The procedure helps restore the patient’s marrow, which can become damaged because of the disease and radiation treatment. Finding a tissue match for a bone marrow transplant is difficult; siblings only have a 25 percent chance of becoming a donor.

With the help of DKMS, Frances Scarantino, director of Howard Beach’s Reach for the STARS, held a bone marrow drive to save Philip and others lives.

“I was contacted by the Borough President’s office [about the program], and I was more than happy to donate the space and volunteer,” Scarantino said.

Phillip’s wife Theresa has been working endlessly to get bone marrow donors. While she obviously would love to find a match for her husband, “It’s not just for Philip,” she said. The drive at Howard Beach was the sixth drive she’s attended. On Columbus Day, Theresa was on the streets of Manhattan during the parade and recruited more than 90 donors.

Theresa believes if people were more educated about the transplant process, they would be more willing to register as donors. “People are afraid of needles, but it’s a simple blood transfusion now,” she said. Instead of the old process of extracting cells from the pelvic bone, bone marrow can now be ex- tracted from a blood transfer. Patients take pills before the extraction to increase their blood cell count and blood is taken in a simple outpatient procedure.

Residents of Howard Beach were more then happy to help out. “If I can help someone I will,” Lance Oseff said.

William Montalvo has wanted to register as a donor for some time. “My wife’s coworker needed one [a bone marrow transplant] as well, and he was successful,” Montalvo said.

Philip and Theresa have been taken back by the kindness and compassion showed by strangers.
“If I don’t make it, I’ve made a whole lot of new friends,” Philip said.

To register as a bone marrow donor or to make a financial contribution to DKMS, visit dkmsamericas.org.
Posted by The Forum Newsgroup at 10:25 AM