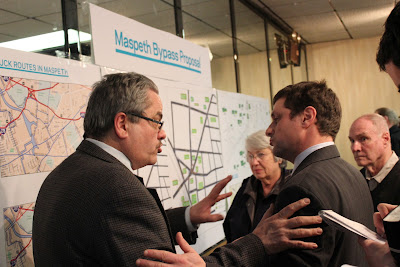 The city Department of Transportation finally responded to years of protests and requests to address truck traffic in Maspeth and released its proposal of the “Maspeth Bypass and Intersection Normalization” study last Wednesday.

Concerned residents gathered at the Kowalinski VFW Post on Maspeth Avenue as DOT officials answered questions and presented the department’s plan to get trucks away from Maspeth’s residential streets and commercial areas to improve the safety and quality of life for the community.

The DOT’s first order of business is to make Grand and Flushing avenues as local truck routes beginning March 25. For years, truckers could skip traffic on the highways and take Grand or Flushing avenues—a through truck route—on the way to make local deliveries in Brooklyn.

The DOT has also proposed directing trucks travelling through Queens to take the Queens-Midtown Expressway/Long Island Expressway to exit 18 at Borden Avenue. Trucks would then make a left on 58th Street south towards Rust Street, make a right on Grand Avenue and continue on Grand Street to Marcy Avenue in Brooklyn. Currently truckers tend to get off earlier exits and travel solely down Grand Avenue or Flushing Avenue, which encompasses the more residential and commercial centers of Maspeth.

These changes would necessitate a slight route change for the Q39 bus. DOT officials at the meeting indicated the MTA has said changing the bus route would not be an issue.

The proposal was met with mixed reviews from the community. While residents at the meeting were pleased the DOT was moving the project forward, they felt the DOT’s actions needed improvement. “It’s a start,” said Gary Giordano, district manager of Community Board 5. Giordano said he was worried that the one-way conversions, especially the conversion of Maspeth Avenue, could wreak havoc on Maspeth residents’ daily commutes.

Mary Anna Zero, of the Maspeth Chamber of Commerce, said the plan seemed good, as long as it was enforced. Trucks in the area block pedestrian traffic and buildings get covered in diesel, which makes it difficult for businesses in the area. It was time something was done, she said.

Tony Nunziato, a civic activist who was among the first to fight for a Maspeth bypass—he and Frank Principe presented a similar version of a bypass to Community Board 5 more than 10 years ago—said the plan had major flaws.

Many trucks travel from Brooklyn on Flushing Avenue to reach the Long Island Expressway, and the DOT did not present a bypass for that route, Nunziato said. He stressed a majority of the area’s truck traffic stems from this route, and without addressing it, the community’s problems would not be alleviated. Nunziato’s original plan called for trucks to make a left on 55th Street to Grand Avenue up to Rust Street.

Giordano expressed concerns that a route from Brooklyn into Queens was not presented as well. Bob Holden, president of the Juniper Park Civic Association, also questioned why the trucks from Brooklyn were not addressed.

“They didn’t include the other direction at all,” Holden said.

Awareness was a big issue for the DOT; what’s the purpose of changing all the routes if truckers don’t know about them? The department intends to erect multiple signs alerting truckers about local and through truck routes on Maspeth’s streets, as well as signs indicating the proper way to the highways. On the Long Island Expressway, signs will be posted that inform truck drivers that exit 18 is the proper way to enter Maspeth.

“Just putting the signs up will change the activity [of the truckers],” said Queens Borough Commissioner Maura McCarthy.

DOT spokesman Scott Gastel said many of the residents’ concerns about Brooklyn routes could be solved with signage guiding trucks to the proper routes. He also said the DOT will continue to work with the community to make further improvements.

These changes can’t come soon enough for a community that has waited years for a solution to its problems. McCarthy said the next step was to analyze the community input they received at this meeting and a formal presentation to Community Board 5, which she hopes will be by May. Tentatively, the redesign of the five-leg intersection will begin this summer.
Posted by The Forum Newsgroup at 10:39 AM