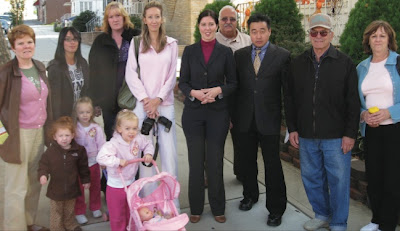 City Council candidate Elizabeth Crowley and a group of Middle Village residents took to the street last week to call on the city to take steps to reduce the amount of drivers speeding through their neighborhood.

Crowley, a Glendale Democrat challenging incumbent Anthony Como for his spot on the City Council, gathered with about a dozen residents at the intersection of 73rd Place and 66th Drive, on Friday afternoon. According to the residents, drivers routinely speed through the intersection, which is a block north of Metropolitan Avenue, endangering the many young children who live nearby.

“It is a problem – lots of cars do speed down here,” said 71-year-old Tony Demeri, who has lived in the neighborhood for 41 years. “It is a hazard to everybody who lives here, especially children. It is not a healthy situation.”

The residents are asking that the city Department of Transportation conduct traffic studies at that location to determine whether a stop sign or other traffic calming measures, such as speed humps, can be installed. Crowley was joined at the event by the chief of staff for Councilman John Liu (D-Flushing), who is the chair of City Council’s Transportation Committee.

According to Crowley, officers from the 104th Precinct previously had a temporary speed trap setup on the block, with some cars clocked at more than 60 miles per hour. “We’re casting light on a situation that is very dangerous,” she said. “It is an accident wait- ing to happen and needs at least a stop sign.”

John Choe, who represented Councilman Liu at the event, vowed to push for DOT to conduct a “thorough study” of the intersection. “We will bring it to the attention of the DOT, which is a big agency that doesn’t always know what is going on in each community.”

However, neighbors have been reaching out to the DOT for help for at least two years, according to resident Jennifer Rup. She wrote to former Councilman Dennis Gallagher in 2006, who forwarded her concerns to Maura McCarthy, Queens Commissioner of the DOT. Rup said she received no response, and wrote a letter to current Councilman Anthony Como in July. He also wrote to McCarthy to alert her of the situation.

“It’s very frustrating,” said Rup, a mother of three-year-old twin girls, of the lack of response from DOT. “We’ve tried since 2006, and nobody has responded. They’re waiting for a fatality to happen.”

In addition, Gary Giordano, district manager of Community Board 5, wrote to the DOT’s Office of Signals and Intersection Control to request a stop sign at the intersection. “Seventy-third Place is too often used by speeding vehicles, who have little regard for the intersecting traffic going from Metropolitan Avenue north towards Juniper Valley Road,” he wrote in the letter, which was copied to McCarthy.

A message left with the DOT seeking a comment from McCarthy on the request was not returned as of press time.

“They know how many people are speeding,” said Crowley, referring to the DOT. “We’ve seen it ourselves in the past fifteen minutes, and this is not even the height of it.”

Update: A DOT spokesman said following press time that a previous study found a stop sign is not warranted at the location, but the department is still looking into whether speed bumps should be installed there.
Posted by The Forum Newsgroup at 10:00 PM