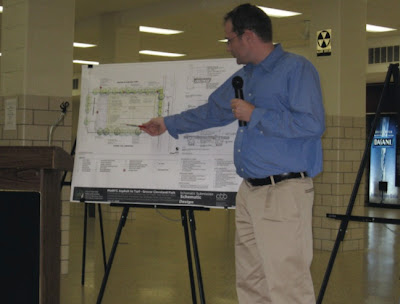 Parents and children can look forward to revamped playgrounds and sports fields in Middle Village and Ridgewood, the Parks Department informed members of Community Board 5 at its meeting last week.

Officials from the city’s Parks Department and a landscape architect firm unveiled plans to reconstruct a portion of the south playground at Juniper Valley Park, at 74th Street and Juniper Valley Boulevard in Middle Village and to install a turf field in Grover Cleveland Park in Ridgewood.

The presentations were part of Community Board 5’s monthly meeting in Christ the King High School last Wednesday. Board members did not express any major concerns with the proposed projects.

The work at Grover Cleveland Park will include the conversion of an existing asphalt court to a synthetic turf field, according to landscape architect Thomas Atela of the Manhattan-based firm Abel Bainnson Butz, LLP. When the $1.3 million renovation is complete, the park will feature a softball field, two soccer fields and two volleyball courts.

The project’s design will be completed this fall, according to a Parks Department spokeswoman. Construction will begin shortly after and is expected to take about six months to finish. The project is part of the mayor’s PlaNYC initiative, which among other things, aims to convert asphalt courts into turf fields at 25 city parks.

Grover Cleveland is among five sites that were included in the project’s first phase, according to Atela. In addition to the fields, the project also includes new fences and perimeter tree plantings and an upgraded water drainage system. “We’re trying to be as green and environmentally-friendly as possible,” he said.

Next, the department’s landscape architect, Lee Ann Beauchamp and the design supervisor for Queens, Nancy Prince, presented plans for the new playground at Juniper Valley Park. The reconstruction, funded by a $750,000 City Council earmark, will provide new play equipment at the eastern portion of the playground along Juniper Boulevard South at 74th Street. Separate areas will be established for toddlers and for children ages two to five and will also accommodate handicapped children.

The new design will incorporate the neighborhood’s past history as swampland. In 1915, the Juniper Swamp was filled in, becoming Juniper Valley Park and allowing for development of the surrounding area, according to the Parks Department. The new playground will feature wetland plants and animals, along with a spray shower and lily pad design in the concrete pavement area.

The existing basketball court at the western end of the playground will not be affected by the renovation project. In addition, as a result of meetings with local parents, gates will be installed at each entrance.

While board members were generally supportive of the projects, two aspects did concern some board members: the use of artificial turf at Grover Cleveland and the inclusion of a sandbox at Juniper Valley.

Responding to questions from board members, Atela explained that the “in-fill style” turf is made from a thermal plastic material, instead of rubber pellets used previously in city parks. “It is a fairly new product that performs well,” said Atela, adding that several different types and makes of turf will be used among the 25 field conversion projects planned around the city.

The turf being used at Grover Cleveland comes with an eight year warranty and can be peeled up and replaced. It will be inspected yearly by the manufacturer and will be maintained on a regular basis by Parks Department employees.

The second concern came from Lorraine Sciulli and other board members, who questioned whether the Juniper Valley Park project should include a sandbox. Sciulli argued that it could lead to hygiene issues, and others noted it could be used by stray cats.

The Parks representatives explained that the sandboxes are included at the direction of Parks Commissioner Adrian Benepe and said they are only installed in parks that include a field office. However, as a result of the board member’s concerns, the sandbox proposed for this project will be eliminated, according to the department.

These two parks efforts are part of the “largest expansion and improvement” of city parks since the 1930s, according to the department. “Thanks to Mayor Michael Bloomberg’s vision for a greater, greener New York, the Parks Department has the funding to renovate numerous parks and to provide city residents with more opportunities for enjoying the outdoors all over the five boroughs,” a spokeswoman wrote in a statement.