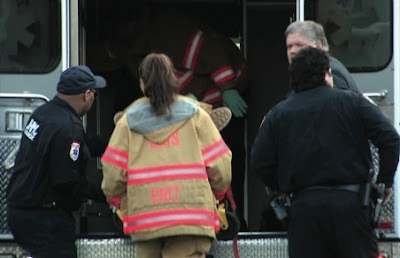 First Homicide in Queens in 2009

Last Thursday, police from the 106th Precinct responded to a 10-34, an assault in progress, at 103rd Street near Rockaway Boulevard. Police Officers Competello and Nolie were traveling to the location when they were stopped by Building Department Inspector Gregory Heath who informed the officers that he was following a black male whom he had just witnessed shoot another male.

The officers then came upon the male, identified as 18-year-old Cameron Wade of South Ozone Park, and made the arrest of the alleged shooter. Sgt. Marcos Pichardo then arrived at the scene and was met by Jaqnanan Shamindra who told Sgt. Pichardo that he and his brother-in-law, Jagdesh Beni, had gotten into an argument with the suspect when Beni, who was driving, refused to let the teen pass in front of the car entering the driveway.

Witnesses at the scene said that Beni entered the driveway with no regard for the pedestrian and that if the teen did not jump to move out of the way he would have been struck by the vehicle. A surveillance video from a neighbor’s house shows that Wade banged on the side Beni’s car with his fist because he had not been allowed to pass.

Beni, his brother-in-law and another relative then got out of the gray BMW and after some heated words were exchanged, Beni and the two men pursued the 18-year-old, who fled across the street, and cornered the teen. The argument escalated and Wade pulled out a silver revolver and fired once hitting Beni in the chest. The illegal handgun was recovered at the scene.

Wade Cameron was arraigned in Queens Criminal Court on Friday on charges of second-degree murder, first-degree manslaughter and second-degree criminal possession of a weapon. He was ordered held on $150,000 bail and could face up to 25 years in prison if convicted. Cameron’s next court appearance is scheduled for January 23. The 18-year-old has no prior arrest record.

Jagdesh Beni, 33 was taken to Jamaica Hospital where he was pronounced dead. The father of three was a welder by profession and has a string of arrests for violent crime including attempted murder, assault and criminal possession of a weapon dating back to 1995.

This version of what actually happened is so frabricated. So where is the video that proves all of this. Furthermore, whatever happened in 1995 had nothing to do with what kind of man he was in 2009. Which is a loving father and husband who was also loved and adored by everyone who knew him.

this is the footage from nbc. I agree. That last paragraph about his record is irrelevant and has nothing to do with his murder.