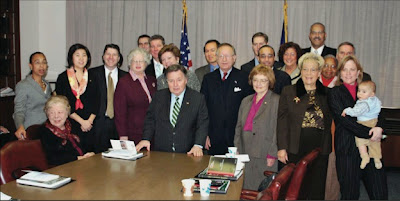 Warns Officials of Impact Budget Cuts Would Have

At his recent legislative breakfast, Queens District Attorney Richard Brown boasted of the historic decline in serious crime in the borough, but warned that budget cuts could jeopardize this progress.

He began by announcing that crime in the county “continued its historic decline in 2008,” while at the same time Queens continues to lead the city in terms of prosecutions of many major categories. The trend includes a 3.7 percent decline in serious crime, led by a 10.9 percent drop in burglary. Overall, crime has been reduced by 34 percent since 2001 and 76 percent since 1993.

“Clearly, these figures – showing that the levels have remained near or below their historic lows – offer clear and compelling evidence that our law enforcement initiatives continue to have a profound impact in making Queens County one of the safest counties not just in the city but in the nation,” he said.

Brown attributed the dramatic reduction in serious crimes to several factors, including that criminal prosecutions – which include non-violent and quality-of-life offenses – in Queens County have now exceeded the 70,000 mark for the third straight year. In addition, Queens handles only 21 percent of the city’s violent felony prosecutions, but is responsible for nearly one third of the city’s violent felony convictions. The county’s felony conviction rate remains best in the city at 91 percent, while its dismissal rate of felony complaints and indictments was the lowest.

Looking forward, reducing gun violence continued to be among Brown’s priorities. To further this goal, he announced that he will hold a gun buyback program in the Rockaways on February 21. Individuals will be allowed to turn in guns no questions asked in exchange for $200. The program comes as homicides in Queens are on the rise, with 95 last year, 23 more than in 2007.

“In 2008, we took full advantage of recent state legislation that increased the penalty for possession of a loaded firearm – particularly with respect to repeat offenders,” he said. “Our success in this area is reflected in the fact that Queens County has the city’s highest conviction rate and second highest incarceration rate for gun possession.”

Not surprisingly in light of the national economic crisis, mortgage and real estate fraud has begun to be a significant program in Queens, said Brown. His Economic Crimes Bureau has been inundated with a growing number of such cases, many of which target the elderly. At the same time, other types of fraud and financial crimes have mushroomed in both number and scope, including identity theft and credit card fraud.

Last year, the Consumer Affairs Unit received nearly 1,200 reports from individuals and businesses who were victims of a variety of scams. “I am optimistic that by continuing the very successful strategies that we have employed in recent years we, together with our law enforcement colleagues, can make Queens County even safer in 2009,” said Brown.

He noted that more than 2,500 individuals visited the Family Justice Center in the first three months after it opened in July. “The families who have accessed the center receive case management, counseling, civic legal assistance and other services,” he said, noting that 38 percent of the clients were directed to his Domestic Violence Bureau for assistance in pursing a criminal prosecution.

Brown pointed out that his Domestic Violence Bureau has the highest conviction rate and the lowest dismissal rate of domestic violence cases in the city, and takes more pre-indictment felony pleas than the rest of the city combined. He also updated the officials on two pilot programs launched last year involving the use of electronic monitoring. Under Operation Exclusion Zone, certain individuals convicted of domestic violence are required to wear electronic ankle bracelets.

If an abuser crosses into a prohibited zone – such as near the victim’s house – an alert is transmitted to the monitoring company, which alerts the victim and calls 911so police can arrest the offender. A second program recently implemented uses a monitor to check whether an individual who has committed DWI or other alcohol-related crimes including domestic violence fueled by alcohol consumption – has an elevated alcohol level.

Brown used the meeting to remind the elected officials that the “repeated and substantial” city, state and federal budget cuts his office has suffered in recent years has continued due to the national fiscal crisis. “As a result of budget cuts since 9/11, we have been forced to substantially reduce costs just to maintain our core functions – things such as case intake, hearings, trials, appellate litigation and our highly specialized investigative initiatives,” he said. “And yet the reality is that arrests remain high.

Since 1993, arrests are up more than 70 percent. And new trends such as the increase of homicides and proliferation of gang activity and the increase of real estate and mortgage fraud cases require additional attention and resources.”

Brown concluded the meeting with a plea for help from the elected officials, who shape the budgets that fund his and other city prosecutor’s offices. “The bottom line is that we need you – more than ever before – to help us to get the resources necessary to continue to reduce the level of violence within the county and improve the quality of lives of our residents.”
Posted by The Forum Newsgroup at 11:00 AM