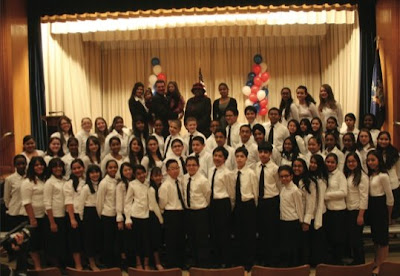 The official swearing in of Joseph P. Addabbo Jr. as state Senator took place in Albany on January 1. But the pomp and circumstance at the state capital could hardly replace the show of support and pride paid the new senator at a second ceremony held on Saturday morning.

One by one standing at the podium governmental colleagues showered praise on Addabbo. His commitment, fortitude, determination and integrity were all included their descriptive narratives. But then it came time to hear from the man himself Senator Joseph P. Addabbo. “Ladies and gentleman, thank you so much. The reason that we do ceremonial swearing in is to give me the opportunity to say thank you. Thank you, because you are the reason I am standing here today.”

Addabbo went on to thank the individuals who played pivotal roles in his campaign, his career and his life. He went as far back as his political science teacher from Archbishop Molloy, to the staff of PS 60 who painted the auditorium themselves for the special occasion, the choir of MS 210, his staff and the more than one-thousand volunteers who turned out on Election Day.

To his family Joe Addabbo gave the credit of not ever having been able to do it without them. But there were special thanks for one particular person. “I cannot do it alone. I definitely need someone behind me to support me 24/7,” said Addabbo. “And if you think I have a hard job, how about a working mother with a 2-year-old and a four-year-old. A husband in Albany—my wife is a phenomenal person and I want to thank Dawn for all she does and continues to do.”

“He taught me a lot about how to be a successful public servant and one thing he taught me was how to listen and act on what people are telling you; to look at a people’s problems not through our eyes but through their eyes. You can only see the magnitude and seriousness of the problem when you look at it from the person that comes to you.”

Sen. Addabbo went on to offer a pledge to his constituency---to listen to all the residents in his district and to act on their concerns and suggestions. “I promise to represent you to the best of my ability. That includes all the people, seniors, children, parents, the working people of my district, all of you.”

He also pledged to work tirelessly, every day and maintained that his policy of a 24/7 hotline will remain in effect because he believes that’s what the people are entitled to. And the new senator unveiled his plan and promises for the future. “I understand the job that I do. It has a long and strong impact on the people I represent. I understand the gravity of it all. So I’ll tell you this--- I’m ready.

Ready to make those hard decisions. Ready to stand up for education and to make sure we spend money properly for the programs in our schools and deal with mayoral control. That’s why we do our ceremony in a school today because education is so important.” Addabbo went on to cover more crucial issues.

And as he closed his remarks to the crowd, Addabbo offered a picture of the future. “We cannot let hard times stop us. We cannot be crippled we must move forward together and shape a positive future. We are New Yorkers. We face every challenge before us and we go forward. We must look at government differently; end party politics and work together to make things better for the people. That is the focus. When you come to me you will find an open hand, an open door and an open mind. I ask not only for your cooperation but for your patience. I am proud and deeply grateful to be your state senator.”
Posted by The Forum Newsgroup at 11:45 PM