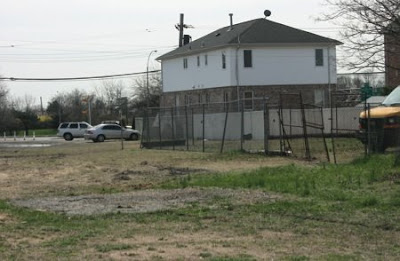 Residents in the Centerville area who live adjacent to vacant properties owned by the New York Racing Association received letters from David R. Malts & Co. on March 25, informing them that NYRA “has decided to liquidate certain assets that are not part of its core business strategy.” The letter also informed residents that they had to remove any structures, fences, pools or items stored on the NYRA property.

The letter indicated that David Maltz & Co. would be conducting an auction of the land on May 13th. David R. Maltz & Co. Inc. is an auction company that specializes in sales that are debt related. Since those letters were sent out to residents it appears the auction date has changed. According to the auctioneer's website, it is to take place at the racetrack on June 10th.

The 64 tax lots are all located in the Centerville area and are presently vacant land. All are zoned R4 which allows only for residential development. According to the auctioneer, lots/assemblages Range from 2,000 - 75,000 Sq. Ft.

At the Community Board 10 meeting two weeks ago, NYRA Vice President Liz Bracken and NYRA's Community Relations Manager, Joanne Adams, were present, but provided little information as to on how local residents whose properties abut the lands to be sold could participate in the auction. The Board requested that such information be provided.

The land now in use by the Ozone-Howard Little League is not among the parcels to be sold. The Little League will continue to operate on the NYRA owned land it uses.

Some community residents maintain they were not aware until now that NYRA intended to sell off the 64 surplus lots it doesn’t utilize. But the sale of the parcels has been brought up at the Ozone Park Civic Association meetings as well as at the Community Board and other area meetings many times over the last few years.

According to NYRA Chief Administrative Officer John Ryan, “The New York Racing Association has been wanting to sell these properties for years.” NYRA had sought approval to sell them in 2005 as part of its effort to stave off bankruptcy proceedings, but that sale did not advance.

Most proceeds generated from the planned sale are to go toward NYRA's debt, including an outstanding IRS bill estimated to be around $25 million and a state tax bill for back taxes in the amount of $1.4 million. A small portion will be set aside for capital improvements.

State Sen. Joseph Addabbo Jr. (D-Howard Beach) said he is seeking information from NYRA as well as Gov. Patterson’s office concerning the upcoming auction. “What we have to realize here is that the residents of this community will have to deal with whatever is built here for a long time,” Addabbo said. “That mandates that we carefully review every detail now.”

Following a meeting with NYRA last week, Sen. Addabbo has requested a map to physically see the layout and contends that he will push hard for current homeowners to have the first shot at purchasing adjacent properties. “Certainly we want to see people who live here have an opportunity to buy land parcels that are connected to their homes and not have developers come in and take that away from them.” Maps of the area and the lots planned to be sold was provided to Addabbo, Assemblywoman Audrey Pheffer, and Community Board 10 Chairperson Betty Braton by NYRA at later meeting with NYRA President Charles Hayward and other NYRA staff.

Sen. Addabbo also stated that there are problems with some parcels of land because they could “disappear” as a result of a slated city project, 411B, which will serve to widen streets in the area. “There are parcels included in the auction package, such as some on Bristol Street, that could be lessened by at least a third of their size due to their physical location when 411B begins.”

According to the senator, although 411B has been talked about for nearly 15 years it will definitely come to fruition, and when it does there are lots on certain mapped, as yet unconstructed, streets that run right through the center of the project. All of the lots NYRA plans to sell are located within the HW411B project area.

Addabbo isn’t the only elected official that is promising constituents a watchful eye. State Assembly member Audrey Pheffer says she plans on closely monitoring NYRA’s sale. Stressing the importance of keeping residents informed, Pheffer said, “This process must be run in an extremely open fashion. The residents must know exactly what to expect. She said that because the properties in question are all subject to zoning restrictions, all new construction would have to be similar to existing structures throughout the area.

NYRA has indicated that it will provide more information as soon as it becomes available.
Posted by The Forum Newsgroup at 3:10 PM

In response to Marge who writes: "It's for your dogs, not you, and I can guarantee your dog doesn't care where it is so long as he gets exercise."


Clearly you don't understand how the 50+ dog parks in NYC operate or the function they serve for dog owners, as well as non-dog owners.

The dogs don't take themselves to the dog park--there are usually more owners at a dog park than dogs.

Dog owners use dog parks 365 days a year in all weather. Compare that to locked baseball fields that lie fallow much of the year taking up prime areas of the park, or basketball courts that are not used in certain seasons or weather or other recreational activities such as bocce.

Dog owners are taxpapers, and represent one of the largest constituencies of park users.

So to say that dog runs are for the dogs and not for the owners who are interested in recreating with their dogs, throwing a frisbee, a ball, running, as well as socializing with their fellow neighbors while their dogs also socialize and exercise, indicates Marge, that you really don't understand the function and purpose of a dog park.