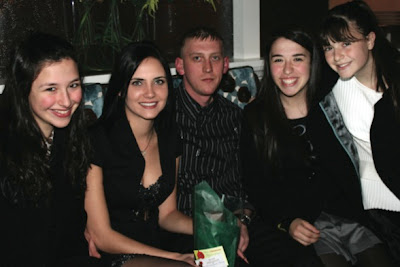 The season of thoughtfulness and giving is upon us, and for three sisters from Howard Beach, the spirit of the season has been raised to another level—one they say they intend to keep up.

The Connolly ladies, Rachel, 16, Joanna, 15, and Shannon, 13 say their experience as a “military family”—brother Gerard is a West Point cadet—has made them very aware of the stress and pressure that military personnel face when confronted with being away from their loved ones and families. They are especially concerned with young, married military couples who are often separated during their tours of duty and who have very little quality time together.

“We just wanted to come up with a way for some of these troops to have something special,” said Rachel. “To have a night where they could go out on the town and forget about everything but each other and having a wonderful time.”

And so after many hours of conversation and planning the Connolly sisters came up with “Operation Date Night.” The concept provides for a military couple who are nominated by other troops at the base where they are stationed to be chosen for a night out on the town. Joanna Connolly says that she and her family were inspired by the date night that President Obama and his wife spent in New York.

“It just got us thinking. The Obama’s called attention to the fact that spending time like that is important to all couples,” said Joanna. She also pointed out that there is a very high divorce rate among military couples because of the stress and responsibility that comes with the job.

“They have very little time together and we think something like this could really help.” Rachel Connolly explained. “It gives them the opportunity to go out and have a great time with nothing to worry about—especially finances for the night.”

Worrying about nothing is a great way to describe the evening the girls set up for their first couple, Staff Sgt. Michael Bacon, 28, and his wife, Kim, 25, who were overwhelmingly chosen by fellow military staffers at their home base in Fort Hamilton, Brooklyn.

Sgt. Bacon serves in the Military Police and recently returned from his second tour in Iraq. While on his first tour which began in 2007, he was shot in the line of duty and awarded the Purple Heart. The couple also celebrated their two year wedding anniversary just days before they went on their memorable date.

The couple was picked up at the army base in Ft. Hamilton by a white stretch limousine, donated by Designer Limousine and whisked off for dinner at Howard Beach’s exclusive Italian/Mediterranean restaurant, Vetro by Russo’s on the Bay. After dinner they were driven to Manhattan’s Broadway where they were treated to a performance of In the Heights. The theater tickets were donated by the USO.

Shannon Connolly was first to praise the restaurant for their willingness to donate a wonderful dinner to help out with Operation Date Night. “The food here is so wonderful and the restaurant and the lounge — everything is so beautiful — you would have to feel special here.”

And feeling special is exactly what the Bacon’s did. “It’s so nice to be appreciated like this,” said Sgt. Mike Bacon. “This is an experience that we will never forget. It is a chance for my wife and I to enjoy ourselves and just to be alone without a care in the world.”

“I would like to thank Rachel, Joanna and Shannon and everyone for doing this for us,” said Kim Bacon. “The restaurant is the most beautiful one I have ever seen. What an unbelievable way to celebrate our anniversary and the upcoming holidays.”

If it’s up to the Connolly’s Operation Date Night will continue with more and more troops being invited to escape everyday military life. “We hope this can go on forever,” said Rachel Connolly. “It’s such a good thing for everyone.”

The girls say that Vetro will continue to donate the dinners and they will continue to seek donations from limo companies. Vetro owner Frank Russo says he is very leased to be able to help out and looks forward to hosting many more couples at his restaurant. “This is a phenomenal thing that these girls have done. Putting this together is something we should all be very proud of them for.”
Posted by The Forum Newsgroup at 2:00 PM