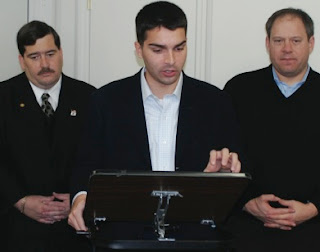 With a sense of déjà vu, elected officials and community leaders again find themselves fighting against proposed service cuts that are included in the budget plan recently approved by the MTA.

The MTA’s budget plan, unanimously approved last Wednesday, was forced to address a $383 million gap that developed over the past two weeks as a result of state budget cuts and lower than expected tax revenues. To close this gap, the MTA’s budget plan includes elimination of student discount, cuts to the Access-A-Ride program, elimination of the Cross Bay Bridge toll rebate program and service cuts along some bus and subway lines.

Among the proposed service cuts are elimination of the W and Z trains and more than a dozen borough bus lines, including the Q56, which runs along Jamaica Avenue. While this results in a redundancy of services in some ways, residents and officials say having both a bus and train option along Jamaica Avenue is essential for senior citizens, the handicapped, families and customers.

To draw attention to the cuts, officials including Assemblyman Mike Miller, Councilman Eric Ulrich, Councilwoman Elizabeth Crowley and Assemblyman Rory Lancman gathered on Tuesday and urged the MTA to reconsider. “It is going to have a major impact on Woodhaven and Richmond Hill,” said Miller. “It doesn’t make sense – why would you cut the mode of transportation the majority of the community uses?”

For many seniors, the bus is essential because it is difficult for many to climb the several dozen stairs leading to the elevated train stations along the J line. “We know that cuts have to be made. Let’s start at the top and work our way down,” added Miller.

Lancman noted that his district is being threatened with elimination of the Q74 bus, which brings students to Queens College. He recalled that during the last round of budget negotiations and threatened service cuts, legislators agreed to implement a payroll tax to fund the authority. “That was a bitter pill for our economy to swallow… but we were assured by that MTA that was what as needed to prevent the cuts we’re talking about today,” he said, calling the authority a “very sloppily run organization.”

“The MTA needs to start at the top and make itself a well-run organization,” added Lancman. “Then maybe we can talk about the need for sensible service cuts. The focus of this conversation has to be about how the MTA is going to reform itself.”

Crowley said that Councilman James Vacca has devised a plan to avoid the cuts by instead reallocating $140 million of capital funds to temporarily close the budget gap. The funds would come from two sources: more than $90 million in unspent federal stimulus aid that may be allocated towards operating expenses, and about $50 million in MTA operating funds that are currently being used to supplement the capital budget.

Ulrich called the service cuts “a slap in the face of the working men and women of this city” and said they target the “most vulnerable” including students and seniors. “They are telling us they don’t care about Woodhaven, and to me that is the biggest disgrace,” he said.

Maria Thomson of the Greater Woodhaven Development Corp. reminded those in attendance at Tuesday’s press conference that the same fight was waged just last year. Since Jamaica Avenue’s Business Improvement District stretches for 25 blocks, Thomson argued that having bus service along the shopping corridor is essential. “We’re going to make the MTA care [about Woodhaven] because we’re going to fight for this,” she vowed.

In a statement announcing the budget decision, MTA Chairman and CEO Jay Walder said that it is impossible not to have service cuts that impact people when $400 million is taken from the budget overnight, but recognized the need to restore the public’s confidence in the beleaguered authority.

“We have a responsibility to assure our customers and taxpayers that every dollar they sent to the MTA is used as effectively as possible,” he said. “We can’t say that today, and that is why we have to fundamentally change the way that we do business. In short, we must take this place apart to find the efficiencies that will make it stronger. We can’t do it fast enough to take off the table the things we’re taking about today, but this effort is our best chance to restore the MTA’s credibility and protect the critical services we provide.”
Posted by The Forum Newsgroup at 2:00 PM

I want to know your opinion on which 2 types of trading you are most likely to win at if you trade, either Forex or stock trading? Which is most likely to give you better returns and make you richer quicker?
[url=http://apple.technoportal.ua/mp3/apple-ipod-touch-8-gb/comments.html]best forex software[/url]

All About blogger, when it comes to tips and tricks you will find them here, themes, plugins how to make money,all here

Its nice to be a member here [url=http://gossip-girl.watch-movies-and-series-online.com] :) [/url]