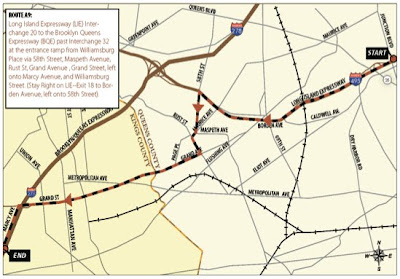 Routes to Presented to Community in September

The city is moving forward with the long-anticipated and much-needed Maspeth Bypass Plan, which would reroute trucks off Grand Avenue and away from the neighborhood’s main shopping district. At an information session this week, officials vowed to have a return to the community in September with concrete proposals for the route. However, after years of waiting, that timeframe isn’t soon enough for some community leaders.

The Department of Transportation has hired a consultant to study specific engineering questions and issues that arose during the 2007 study conducted on the plan, according to Queens Borough Commissioner Maura McCarthy. The consultant and DOT will continue gathering data over the next three months so that proposed routes can be brought back to the community for approval later this year, she added.

“Tonight is about give and take with the community,” she said at Tuesday’s meeting in Martin Luther High School. The DOT will then return with proposals so “the community to decide what the best way to move forward is.” The route suggested by residents several years ago, which would force trucks to use 58th Street after exiting the expressway, will definitely be one of the proposals, said McCarthy. Other potential routes would be developed by the consultant over the next couple of months.

However, Maspeth businessman Tony Nunziato said the city has taken too long to implement the plan. He pushed for the timetable to be moved, something McCarthy said was unlikely. “It’s embarrassing. We’re talking year after year,” said Nunziato. “It’s really unacceptable… I really believe this has to be moved up… We know what the community wants. I’m not waiting another year. We have to address this.”

Robert Holden of the Juniper Park Civic Association said the DOT promised several years ago to at least install signs urging truck drivers to follow the proposed route as an interim measure until the bypass plan could be implemented. Although money was set aside for those signs, they were never erected, according to Holden. He vowed to organize a rally and block traffic along Grand Avenue if the plan is further delayed.

Throughout the session, which featured large poster boards showing the study area and route proposed by the community instead of a formal presentation, McCarthy sought to look forward instead of dwelling on the past delays. “I can’t speak to the past, I can only tell you where we are now,” she said several times. “I’m totally empathetic to the community’s feelings, but I can’t go backwards, only forward.”

She refused to say whether the timeframe has become unacceptably long, and chalked the delays up to the amount of time it took to hire the new consultant to complete the engineering study. “That’s a long wait… but we’re in a position now where we have a consultant on board and are nearing the end of data collection.”

McCarthy also refused to estimate how long it will take to implement the plan after a final route is chosen later this year, noting that it depends on what type of infrastructure work is needed. “If I was a community member I would be pretty annoyed also,” she conceded. “The community is right, they’ve been promised this for a number of years.”

The plan can’t be implemented soon enough for the Maspeth Chamber of Commerce, whose leaders say truck emissions is having a negative impact on the local shopping area. “When the large trucks go up Grand Avenue, they emit black smoke that contains carbon, and people shopping are breathing this in,” said chamber President Jim O’ Kane.

Past chamber president Maryanna Zero noted that it’s an older community, and many of the senior citizens face dangerous conditions while crossing the avenue. “People are upset by it – they don’t like it,” she said of the overwhelming truck traffic. She added that the noise and fumes associated with the truck traffic has made it tougher to rent second floor apartment space and makes it impossible to leave windows open on summer days. “I think it’s a good start, but you will definitely need enforcement,” she said of the plan.

As a businessman, Nunziato understands the importance of moving goods by truck and says the idea isn’t to stifle that industry. “We’re not here to hurt the truck drivers – they have to make money,” he said. “We just need to let them know which route to take.”

“The Maspeth truck bypass is an important project that the community has been waiting on for far too long,” said Councilwoman Elizabeth Crowley (D-Middle Village). “It’s time for the [DOT] to move forward with this project to drastically improve the flow of traffic for this overburdened area.”

Assemblywoman Marge Markey (D-Maspeth) said she has been pushing this issue since the late Frank Principe, who was a civil engineer, helped create a proposal on behalf of Community Board 5.

“A decade of pressure and lobbying by elected officials and community leaders is finally getting us results,” said Markey. “At long last, there is a sucessful end in sight to a decade of frustration about the city’s failure to implement a solution to the longstanding concerns about truck traffic through residential and retail areas of Maspeth.”
Posted by The Forum Newsgroup at 2:20 PM

"Assemblywoman Marge Markey (D-Maspeth) said she has been pushing this issue since the late Frank Principe, who was a civil engineer, helped create a proposal on behalf of Community Board 5."

What a farce! Markey has been a no-show politiican for over a decade. She says she's been pushing this issue since Frank Principe helped create the Maspeth Bypass? That was in 1999! What has she ben doing all this time. The answer is obvious, nothing.