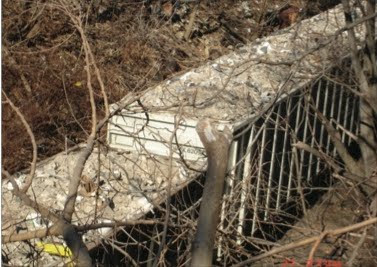 Shortly after 5 a.m. as the night sky gives way to sunrise, residents in parts of Middle Village and Glendale receive their morning wake up call.

Garbage trucks rumble down residential streets and rail cars sit idling as they wait to be loaded with waste before heading to their final destination.

Though the sounds have become in some ways ambient noises to the morning routine, residents and local civic groups say the cars are not only a nuisance but pose a hazard to the quality of life. Over the last few months the battle has heated up, with discussions of waste routes taking center stage.

“We’ve always had the railroad but now they are using our backyards as rail yards and that’s what people in the community didn’t bank on,” said Bob Holden, president of the Juniper Park Civic Association. “It affects peoples lives with the noise and pollution. These people can’t sleep and if you can’t sleep it affects your whole life.”

The trains, which operate using diesel fuel, create soot, mostly made of carbon and other gases including nitrogen dioxide and sulfur dioxide among other pollutants. When combined, breathing them in can have adverse health impacts.

Health impacts from diesel soot in Middle Village “exceeds the risk of all other air toxics tracked by EPA combined,” for lifetime cancer risk, according to the Clean Air Task Force.

Criteria that increase the risk, according to CATF, include living near: highways and busy roadways; bus and truck depots; construction sites; major bridges, tunnels and ports, freight warehouses— and railroad yards and terminals.

“We’re not willing to compromise the effects of our health. Until someone can tell me breathing in that dust is good for me- I’m going to keep coming here,” said Laura Zimmer, Middle Village resident, during the Community Board 5 meeting last week.

Across the nation, Queens ranks in the 99th percentile for unhealthiest counties as it relates to diesel soot intake. According to a study done for CATF, approximately 21,000 people in the U.S. die prematurely each year from breathing diesel soot and 3,000 from lung cancer.

Seeking to counter the effects of the harmful emissions, New York & Atlantic Railway in April announced plans to invest $1 million to aid in emission reduction by one third and its carbon footprint by 35 percent.

In an October 2009 letter to Mary Arnold, a Glendale resident impacted by the trains, the Environmental Protection Agency touted “repowering,” replacing older engines with newer and cleaner certified engines, as the most effective way to reduce emissions.

While diesel emissions pose a hazard, odor and debris from the cars are also a cause of concern. There are primarily two types of rail cars: those that contain construction and demolition debris and those that contain solid waste.

Each type carries its own hazards, depending on how they are stored in the yards. The rail cars with solid waste, covered with solid lids, often emit foul odors during the sweltering temperatures of the summer while sitting in the yard before leaving.

“They shouldn’t leave the trains for hours on end, cooking in the hot sun, stinking up
the entire neighborhood,” Holden said.

However, Holden admitted adding that trying to contain the odor can be difficult. “No matter what you are going to do with these rail cars, the trash is going to stink.” Sealing the lids would trap methane and cause the cars to explode, Holden said.

Though solid waste cars give off pungent fumes, uncovered construction cars can be just as damaging. Though most construction cars have black netting across them, civic groups say it isn’t enough to keep dust and debris from becoming airborne.

Mary Parison, co-chair of Civics United for Railroad Environmental Solutions, said she has stood on porches and see a cloud of white smoke coming from the cars. “There’s plenty of times that there haven’t been netting on them,” she said of the rail cars carrying construction and demolition debris.

CURES along with other groups are pushing local officials to propose legislation that would require railroad companies to utilize a tarp to cover the construction rail cars, as opposed to the netting.

Holden and Parison admit that although seeing change happen in an uphill battle, they are committed to fighting for the communities. Although there are different approaches and ideas to how to improve the situation, Parison said ultimately requires a change in mindset.

“We need to get the railroads to think differently and realize that they are going through the most densely populated areas in New York and there are changes that have to be made,” Parsion asserted.
Posted by The Forum Newsgroup at 2:40 PM