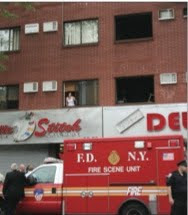 The trial of the former Middle Village woman accused of setting a fatal fire during an argument with her boyfriend on Father’s Day 2008 has begun in Queens Criminal Court.

Agnes Bermudez, 48, of Newburgh, is charged with multiple counts of murder, arson, reckless endangerment and assault in connection with the fire in an apartment building at 69th Street and Metropolitan Avenue that killed her boyfriend, William Salazar, and a family of three that lived above the couple. The trial began last Friday.

This week, jurors saw raw footage of the aftermath of the fire that showed Salazar running into the ground floor deli while flames engulfed his body. They also heard a witness recount the death of upstairs resident Flor Sandoval, 48, who fell from the top floor before firefighters were able to reach the scene.

Police say the fire began after an enraged Bermudez doused Salazar with carpet cleaning fluid before setting him ablaze. The fire quickly spread to the hall and stairs leading to the upstairs family, dooming Sandoval, Garcia-Vera and Garcia. The video was taken from the Z-Star Deli, where employees doused him with gallons of water.

As jurors watched the gruesome surveillance video on Monday, Bermudez “hunched her shoulders and wept,” according to a report in the New York Post.

Her attorney refuted the authorities’ version of events and said that Salazar had actually torched Bermudez during the confrontation.

“The two people from the apartment upstairs came into the store. They were on fire – their hair and their clothes,” Mohammed Al- Matari told The Forum shortly after the fire. “We got them outside of the store and started to pour cold water on them. It was the only thing I could think to do.”

If convicted, Bermudez faces 25 years in prison.
Posted by The Forum Newsgroup at 2:33 PM