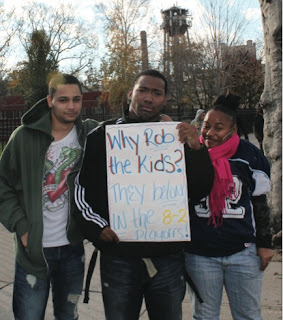 The Spartans were forced to forfeit their first four games because of an ineligible player. Junior Antoine Arnold transferred from Bayside High School and played football there during the 2009 season. The PSAL rules state that Arnold must sit out 12 months before being allowed to play.

The mistake, which school officials have called a “clerical error,” has cost the players an opportunity to play in the playoffs. The Spartans defeated division-leading Beach Channel High School two weeks ago. The players are devastated that this error won’t give them the chance to compete for the championship.

“It’s unfortunate,” John Adams’s Athletic Director Thomas Glass told the Daily News. “It was a couple of mistakes by adults, and the kids are the ones paying the penalty.”

Supporters of the team organized a protest outside of the high school Wednesday afternoon. Chants of “We deserve to play,” were shouted and signs showing the team’s “true” record were displayed.

“We deserve to be in the playoffs,” said team captain Devven Baker. “We put our heart, sweat and tears into the season, and the players came together as a family. We deserve to play.”

PSAL rules regarding ineligible players and penalties are publicly available. The rules state, “If an ineligible student is listed on the roster as active, and/or participates in any interscholastic contest, the team with the ineligible player shall forfeit the contest.” However, supporters of the team feel instead of holding the men responsible for the mistakes accountable, and the kids are forced to shoulder the entire punishment.

Paul Casale, a youth football coach who worked with many of the players in the past, believes the PSAL is sending the wrong message to kids. “The PSAL rules state the principal and athletic director are responsible for ensuring eligibility,” he said. “But instead of penalizing them, the kids are the only ones penalized.”

Casale also felt that the timing of the forfeits was suspect. By the time the team found out about ruling, it was too late to mount a legal challenge to reverse the decision and allow the team to play.

“They worked so hard and are such great kids,” said Patricia Howard, whose son plays for the Spartans. “They earned their spot.”
Posted by The Forum Newsgroup at 1:27 PM