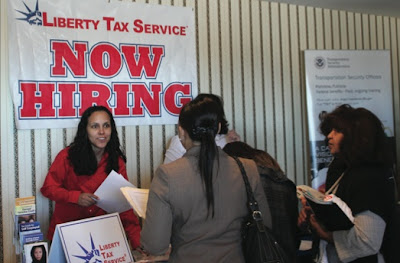 The hundreds of people at Aqueduct on Friday hoping to make a quick buck on horse races were juxtaposed by the thousands desperately searching for a steady buck through full-time employment. Unemployment in the city is at 9.3 percent, according to the state Department of Labor, and thousands of people are competing for increasingly scarce jobs. In response, Senator Joe Addabbo (D-Howard Beach) hosted his third career fair at Aqueduct last Friday in an attempt to match the unemployed with the few jobs available in the city.

Who are the unemployed? A look at those attending the career fair shows unemployment has affected everyone. Recent college graduates who spent thousands on tuition but have found that a bachelor’s degree is not a ticket to guaranteed employment. Moms and dads who lost their jobs and are desperate to provide for their families. There are those who picked the worst time possible to pursue a career change and those who are too young to retire but find- ing they’re too old to get steady work.

“I’ve been doing everything right for fifteen years,” said attendee Keith Charles of Queens Village. “Now I’m being told I need to get more training.”

Overall, attendees like Charles stressed the importance of persistence and the belief that the economy would eventually turn around. “Only thing you can do is keep looking,” he said.

All these job seekers were hoping to impress the more than one hundred vendors at the fair, and each company had positions to fill. Local companies like Ozone Park’s Liberty Tax Service and the Greater Ridgewood Youth Council joined major national brands like Geico, Lowe’s and Avon and governmental agencies like the Department of Homeland Security and the Department of Citywide Administrative Services.

Vendors were selected based on industries Addabbo’s office felt there was growth. While governmental jobs are in jeopardy, there is some growth in areas like home health care and security industries.

Besides looking for employment, job hunters had the opportunity to learn new skills at four well-received workshops. Attendees received tips on personal branding and image, how to balance work life with personal life, job search strategies and how to network.

At the personal branding and imaging workshop, Shandeeyaky Shabazz from non-profit group Dress for Success spoke about the im- portance of projecting a positive image. “If you’re dressed in a track suit, I’m going to as- sume you’re running track. But if you’re dressed in a suit, business attire, I think you’re a successful person ready to work,” she said.

Shabazz also outlined the importance of an “elevator pitch”—a 60 to 90 second introduction that highlights your qualifications and skills.

There were some complaints about the structure of the job fair. One woman, who preferred to stay anonymous, said hardly any company was taking resumes. “They just said to go apply online. I came here to try to avoid that,” she said.
Posted by The Forum Newsgroup at 1:31 PM