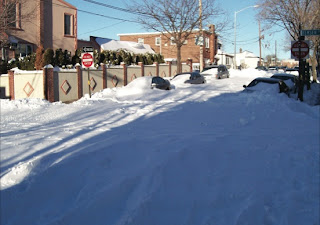 The December 26 blizzard was more than just a nuisance. It could end up costing taxpayers millions of dollars. The State Office of Emergency Management and the Federal Emergency Management Agency (FEMA) surveyed the area and found close to $30 million in damage and cleanup costs.

Governor Andrew Cuomo has requested federal assistance from FEMA due to the December storms, but President Barack Obama must approve the request before any federal funds reach the state.
New York Senators Charles Schumer and Kirsten Gillibrand are requesting that President Obama quickly approve the funds. In a letter written to the President and Craig Fugate of FEMA, the senators stated, “Federal assistance is absolutely critical to helping New York State recover, and I respectfully urge your expeditious approval of this request.”

Besides the record snow amount, Schumer and Gillibrand noted the intense winds, ranging from 30 to 50 miles per hour, downed trees and eroded beaches. The conditions also created massive disruptions to the state and city’s transportation services.

Rep. Anthony Weiner (D-Kew Gardens) also said funding was necessary for the area.
“New Yorkers suffered enough during the holiday storm that left the streets of Brooklyn and Queens looking more like Siberia—they shouldn’t be forced to suffer again by footing the bill for the cleanup and recovery,” Weiner said. “President Obama should approve Governor Cuomo’s disaster declaration request as soon as possible.”
Posted by The Forum Newsgroup at 11:09 AM