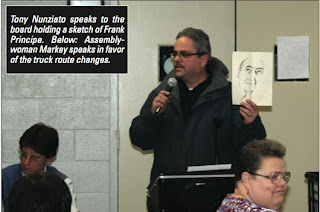 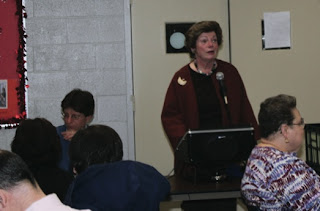 “This should have happened ten years ago,” Tony Nunziato, Maspeth resident and activist, said about trucks rumbling through residential areas and clogging streets as they cut through Maspeth to avoid the Brooklyn-Queens Expressway or the Long Island Expressway. The neighborhood’s residents, led by the late Frank Principe, have been clamoring for changes in truck traffic for years.

Changes are on the way. A public hearing on the city Department of Transportation’s (DOT) proposal to convert Grand and Flushing avenues from “through” routes to “local” routes was held at last Wednesday’s Community Board 5 meeting.

The new designations had unanimous support within the community.

“Everyone is aware of the problems the trucks cause in our community,” said Assemblywoman Marge Markey (D-Maspeth). Congested streets, noise pollution and noxious fumes plague the community.
“[The trucks] do not belong on our local shopping streets,” Markey continued.

Nunziato, who has been fierce critic of Markey—and former challenger to her Assembly seat—agreed getting trucks off the streets in critical for Maspeth. “If we can convert Times Square in three weeks to a pedestrian walkway and bicycle paths, then why can’t the people of Maspeth have their liveli- hood and health?” he asked. Reiterating that he and Frank Principe devised the Maspeth Bypass Plan—designed to route truck traffic away from residential areas of Maspeth to the
more commercial districts—a decade ago, Nunziato said the plan “should have been done a long time ago,” and it was time to “make sure we get what we deserve.”

Jim O’Kane, former president of the Maspeth Chamber of Commerce, complained about “that black smoke” trucks emit, polluting the neighborhood. He also noted that many of the senior citizens around the area are intimidated by large trucks thundering down their streets.

Also favoring the proposal was Councilwoman Elizabeth Crowley (D-Middle Village). “I support this proposal by the DOT to prevent trucks from using Maspeth streets as through streets. For far too long, we have been burdened by these trucks that are destined for other boroughs, and they’re using our borough as a doormat,” Crowley said.

Markey stressed that this change is not a “panacea” for Maspeth’s truck problems. Many trucks would still be on the roads making local deliveries. However, she gave the community great news when she announced the DOT would release the results of “Maspeth Bypass and Intersection Normalization Study” and propose different ways to implement the Maspeth Bypass Plan. In the meantime, the public hearing at Community Board 5 was the last step to change Grand and Flushing avenues from through to local truck routes, and it is seen as an “interim” step before the larger Maspeth Bypass Plan is completed.