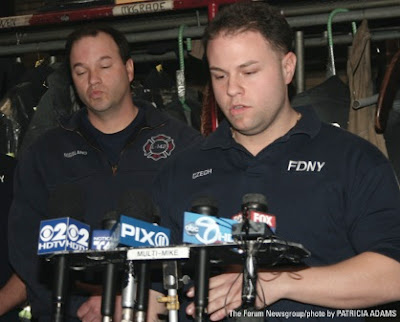 Fire officials say a two-alarm blaze in the three-family row house at 97-12 93rd Street in Woodhaven may have been caused by a lit cigarette. Investigators say the fire began in the rear bedroom of the second-floor apartment, sending flames out the front and back windows, and filling the floor above with intense heat, smoke and carbon monoxide.

Shortly before 5 a.m. on Tuesday morning, a frantic Veronica Montero was screaming to the 911 operator. The 28-year-old mother of two was trapped inside with sons Dylan, 5, and Carlos, 10. The operator tried to talk to her. “Can you get out?” “No,” she screamed, “Please I have two kids.”

Less than four minutes later, Engine Company 285 arrived at the scene. Deputy Chief Paul Ferro said that there had been numerous reports on the way to the fire that there were people trapped inside on the third floor. Engine Companies 285 and 293 began extinguishing the blaze while the outside team from Ladder 142 raised the ladder tower to get to the victims trapped inside. 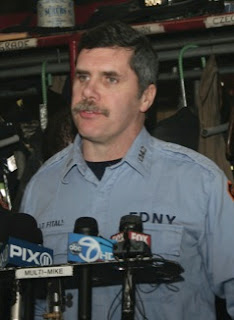 Firefighters Mike Czech and Ed Rissland rode the bucket up to the third floor windows; breaking through the glass, they climbed through the windows. Inside the bedroom, Czech started feeling around for victims. “The smoke conditions were extremely heavy," said Czech. “I felt a foot— I knew it was a child. One of the kids was on the floor and the mother and that child were huddled up. The second child was on the bed next to them pretty much all in the same area.”

“We knew we couldn’t get them out through the inside,” said Ed Rissland, “There were three victims and only two of us. So I went back out to the bucket and Mike passed them out to me.” At the same time, down on the ground, Lt. Mike Fitall of Ladder 143 was making his way up the interior stairs of the building to another victim. The 59-year-old grandmother lay motionless, face down on the floor, halfway in and out of the apartment’s front door.

Fitall was crawling on the floor when he felt the woman’s arm. With help from Doug Caffarone of Ladder 143, they got the woman out to Lt. Tim Murphy and Jay Griffiths, both of Engine 294. “When we got her downstairs, I knew she needed a breath,” Fitall said, “she was real red.” The victim was in cardiac arrest and Murphy and Griffiths administered CPR and mouth-to-mouth resuscitation. “It was a great thing to watch her come back to life,” Griffiths said.

Firefighter Doug Caffarone explained a part of the job that isn’t found in the training manuals or when working with mannequins. “When you have reports of children you get to a different level. You go into that mind-frame - you have to search a certain amount of rooms. You just go in there and do what you know how to do.”

Four victims were taken to area hospitals be- fore being transferred to Weill Cornell Burn Center in Manhattan for treatment in a hyperbaric oxygen chamber. As of Tuesday evening, the condition of both children was up-graded to stable, while their mother and grandmother were still listed in critical condition. 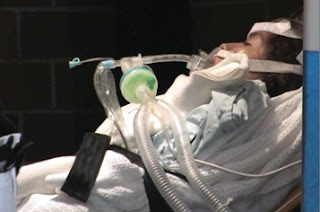 At the close of the press conference on Tuesday afternoon, Deputy Chief Paul Ferro addressed reporters and camera crews.

“I would just like to impress upon you that I was in front of the building and I witnessed the whole rescue. It was an extremely spectacular rescue,” Ferro said. “There was heavy fire underneath them and coming out the front and back windows. These guys placed themselves in very great danger.” Ferro continued on, “Watching children come out the windows was a very tragic thing, But it looks like it’s gonna turn out to be a great day in the city and a great day for the fire department thanks to these guys behind me.”

At the end of the press conference all the firefighters involved in the rescue were quick to shrug off their hero status. “This is a team effort. It’s wasn’t just Mike and me,” Ed Rissland said. “It was every guy here, doing what we do.”

“We’re just thankful that it turned out the way it did,” said Czech. “Whenever there are kids involved and things work out, you’re always thankful. Very thankful.”

And as though it had been officially adopted as the new motto of the FDNY, the corps of press heard it once again - the five words that explain simply how the lives of an entire family were saved. “It’s just what we do.”
Posted by The Forum Newsgroup at 12:30 PM