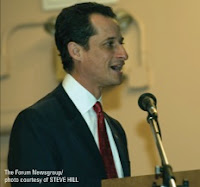 Single parents who turn to the state for help chasing down child support payments are currently hit with a $25 fee, something a local congressman hopes to change.

Rep. Anthony Weiner (D-Queens) held a press conference on Sunday to slam the fee, which he said affects hundreds of thousands of parents who rely on the state Division of Child Support for help receiving payments due to them.

“It is wrong to place an additional tax on struggling families,” said Rep. Weiner. “New York’s middle class are already getting hit with rising energy and property bills and spiking transportation and food costs. Our first reaction simply cannot be to raise another tax on these families.”

The problem started in 2005 when Congress cut billions of dollars in federal aid to child support enforcement. To cover the gap, Congress gave the states the option of passing the cost on to either the receiver of child support or the payer, or to simply pay the fee itself.

In October 2008, the state decided to charge a $25 fee to single parents and their children who collect child support. In New York State, an estimated 287,000 families - including 113,000 in the city - potentially pay this tax, according to Weiner. The fee only applies to families who receive at least $500 in support in a year and have not received public assistance.

At the press conference on Sunday, Lisa Bongiorno, a 44-year-old single mother from Queens who is juggling three jobs while trying to get her daughter through college, said it’s outrageous that money intended to help support her child was taken away. “Every cent towards these children counts. It is ridiculous that this fee is being imposed upon the children and literally taking food out of their mouths.” Bongiorno argued that dead beat parents who refuse to make payments should be responsible for the fee instead of parents receiving support.

Weiner is pushing for $1 billion to be included in the federal stimulus plan for the child support enforcement program. He also wants to prohibit states from charging the fee on to the receiver of the child support.

The bill will be co-sponsored by Senate-designee Kristen Gillibrand (D-Hudson), who was recently appointed by Governor David Paterson to fill the seat vacated by Hillary Clinton. “While families across New York are struggling with the effects of an economic slowdown, the government should not be taxing money intended to help children,” said Gillibrand. “The budget deficit should not be balanced on the backs of single parents."
Posted by The Forum Newsgroup at 11:30 AM