Rally to Save Local Hospitals 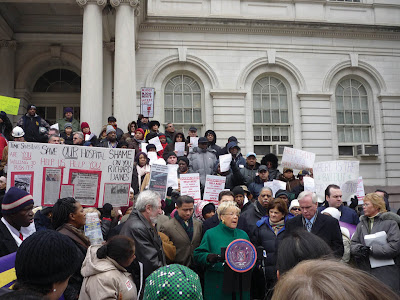 Shouting “Governor Paterson Shame on You” and waving signs to cars passing by on Queens Boulevard, hundreds of employees, residents and elected officials rallied outside St. John’s Hospital on Saturday in hopes of saving the bankrupt facility.

A similar rally was held on Tuesday on the steps of City Hall, and a third event is scheduled for Saturday in front of Mary Immaculate Hospital in Jamaica. Both hospitals are owned and operated by Caritas Health Care, which says it is forced to close the facilities because they are losing millions of dollars each year. 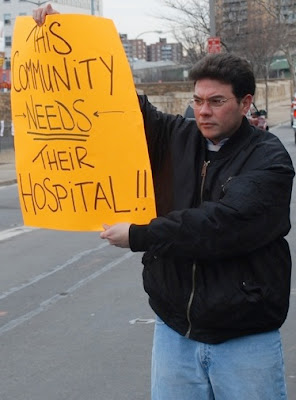 “We need to show Governor Paterson that St. John’s and Mary Immaculate are needed in the community,” said Myrna Bailey, administrative director of clinical services at St. John’s. “Losing 400 beds, a nursing home and trauma center is not acceptable.”

News of the hospital’s dire economic situation first came during Queens Borough President Helen Marshall’s state of the borough address several weeks ago. Caritas’ board of directors has since voted to give hospital executives permission to file for bankruptcy by the end of the month and close the facilities if “no other sources of funding can be identified,” according to a statement released by the health care system.

In addition, the board also authorized hospital executives to submit a draft closure plan to the state Department of Health, which is required before the hospital is allowed to close, and letters were mailed to all employees notifying them of the possible closures.

“Recognizing the serious, far-reaching consequences of these actions, the Board voted to take these measures reluctantly only after exhaustively examining all other options and determining that sufficient funds likely will not be available to present a viable alternative,” Caritas wrote. “Due to the unexpected financial difficulties resulting from the depth of the economic downturn, and its resulting unanticipated severe impact on the State and City’s ability to provide sufficient additional funding... a permanent shutdown of its operations may be necessary.”

The 2,500 employees at St. John’s and Mary Immaculate hospitals were informed in a January 23 letter from Caritas Chief Executive Officer John Kastanis that their employment with Caritas “will permanently terminate between February 14 and February 28” in the event of a shutdown.

Aside from the two hospitals, the closures would affect the 115-bed Monsignor Fitzpatrick Skilled Nursing Pavilion at Mary Immaculate and related medical practices and businesses in Elmhurst, Flushing and Jamaica, wrote Kastanis. In addition, Mary Immaculate is a level-one trauma center and also houses a cancer institute, while St. John’s is a certified stroke and heart failure center and has the only hyperbaric oxygen therapy unit in Queens.

According to Councilman Tony Avella’s office, which organized Tuesday’s rally at City Hall, the state and Governor Paterson’s office have yet to provide an update on the possibility that emergency funding could be released to prevent the closures. Marshall’s office has also been in touch with the state DOH on a nearly daily basis, but didn’t have any additional information on the funding request. However, a source at St. John’s said that the hospital is prepared to begin the closing process this Friday, meaning it might begin accepting people on an elective basis only.

“We have to make sure the people of this city are protected,” said Avella. “This shouldn’t be about money... This is a battle that must be won no matter what.” He called working to keep the hospitals open a “top priority this year and beyond.”

Huntley stressed that the hospital is needed in the area, and suggested that other public officials aren’t doing enough to protect healthcare facilities. “I’m concerned about this hospital because we have people who need this hospital,” she said. “It makes you sad when we elect people who could care less about healthcare. We need to think about that.”

“Don’t let them tell you it’s about money,” said Thompson. “It’s not just about dollars and cents, it’s about people. We are here today to say no... The state has put dollars ahead of people, and we’re not going to allow this.”

Dr. Salman Aly, chief resident at St. John’s, said the impact of a closure would be “tremendous,” especially considering the facility is “packed” on a regular basis. “It’s going to be a substantial loss. We serve an under-served community. We put our hearts and souls into serving the community. The public needs to realize that we need their help... You can say that Elmhurst [Hospital] can take care of it or Jamaica [Hospital], but they’re already overcrowded.”

The two hospitals are losing a total of about $5 million each month and have received $44 million in state grants and loans in the past two years.

News of the potential closures comes just months after the closure of another Queens facility, Parkway Hospital in Forest Hills, which had 251 beds. Officials at North Shore-Long Island Jewish Health System are exploring a plan to acquire the two failing hospitals and replace them with a state-of-the-art hospital in central Queens.
Posted by The Forum Newsgroup at 12:15 PM