Capital, Credentials and Creativity: Is Steve Wynn the Right Choice for Aqueduct? 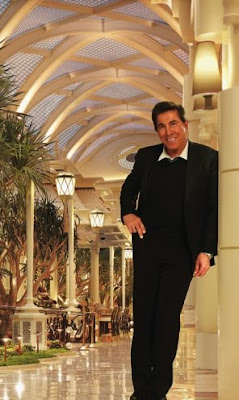 Many industries have seen tried and true products adapted as generic trademarks. The human example of the aforementioned bunch being Steve Wynn, an internationally recognized casino/resort/real estate developer, who likes to dress fun up and invite everyone in.

The billionaire gaming guru is often credited with orchestrating the dramatic comeback and expansion of the strip in Vegas during the 90’s. His companies are responsible for building or re-building some of the most widely recognized resorts in the world: The Golden Nugget, The Mirage, Treasure Island, Bellagio, Wynn and Encore.

Having established successful gaming and entertainment venues from Las Vegas to Macau, many community residents are questioning just how Steve Wynn, whom they see as synonymous with Las Vegas, will fit into the landscape of Ozone Park. After all, say local critics of the Wynn Project, the proposal totally strays from the character of the neighborhood; it simply is too grand.

Representatives from team Wynn recant the notion of such thoughts immediately. “It’s the philosophy of Steve Wynn that we should not underestimate what people want,” said Tom Breitling, senior vice-president of strategy & development Wynn/Encore. “Inherently people have good taste and they want to have fun. Our business is showing them a great time.”

And while we’re visiting the subject of fun on the local front, part of the Wynn plan is to make an investment that focuses on the glory days of old—when thoroughbred racing was a sport as rich as the colors of the jockey silks. Silks that will be represented by a line of colored flags along the facade of the Wynn design for Aqueduct. “We’re hoping to re-create the former excitement of racing; bring new, big stake races back to New York, to Aqueduct,” said Breitling.

But the focus on the racing component is just one part of Wynn’s concept for Aqueduct. Among the top four contenders for the bid, Wynn is the only one that will tackle the project with all new construction at the site. “The existing clubhouse is simply not conducive to comfort for patrons,” according to Kim Sinatra, senior vice president and general counsel for Wynn Resorts.

The existing structure of Aqueduct cannot adapt to more than one of the buzzwords in the Wynn plan. Convenience. Flow. Comfort. Their idea is to compartmentalize the gaming floor so that customers can feel totally comfortable and relaxed in more intimate surroundings. Signature Wynn is their attention to detail. “We look at it from A-Z,” said Breitling, “it’s the 1,000 little things that people most appreciate and look forward to.”

The project design will find guests able to enter through numerous points, either directly from a 2,500 parking garage, or from entrances for those travelling by train or bus. Once inside, patrons will be met with a floor plan that has continuous flow designed to maximize the experience. Another feature touted by Wynn Resorts is a staff to customer ratio that is the highest in the industry. Visitors can enjoy a race book room, a famous Wynn Buffet, and host of other eateries and retail outlets all while being catered to by a staff hired by a very serious Human Resource department. In fact according to statistics, getting a job with Wynn is much more like planning a career—this is a company where desk clerks and black jack dealers can work there way into high-level positions.

But perhaps the most integral part of the structure of the Wynn plan has more to do with brass tacks than aesthetics and fun. Wynn Resorts is prepared to deliver funds promised to the state immediately upon being chosen. One-hundred million at the announcement of the bid, followed by one-hundred million upon closing and another one-hundred million over the life of the 30 year contract with the state. Wynn Resorts will provide more than 6,000 jobs as a result of the project, hiring and training local residents as part of the employment program.

The money factor in this equation is one which state and local officials are considering very carefully. As a result of a failed bid by former and current bidder, Delaware North, the microscope of finance is over the heads of all bidders.

It appears that Wynn’s $300 million bid is the highest among the lead competitors, Aqueduct Entertainment Group, SL Green and Delaware North, the group who has returned in this round of bidding. A central concern to officials is whether or not the bidders can deliver the funds promised. Weighing the evidence says Wynn absolutely has the money, which is not contingent on future happenings. If chosen they have committed to the guaranteed sum of $300 million for New York State.

For the people of south Queens most directly impacted by the winning bidders, there are many factors to consider. And when they look beyond the glitz and glamour of that which is Wynn, perhaps they will also note the company’s foundation --clearly rooted in financial strength, industry experience and customer focus.

For the elected officials who will contribute to the decision of choosing the winning bidder, the onus is upon them to deliver the candidate who can absolutely guarantee the money promised the state without exception.

In summing up Wynn Resorts as the best partner for the community and for the state, Tom Breitling offered his explanation. With regard to the man who would re-define the current conception of a racino, Breitling says simply and with a smile, "With Mr. Wynn, there is a certainty of execution." In other words, with Steve Wynn behind the curtain, the show will go on.

This concludes The Forum series on the companies involved in the bidding process. A decision is expected to be made in the very near future with a possible announcement coming from Governor David Paterson on Labor Day from Saratoga Race Track.

Above: Steve Wynn at the entrance of the atrium at Encore Las Vegas. (Photo courtesy of Wynn Resorts.)
Posted by The Forum Newsgroup at 10:50 AM