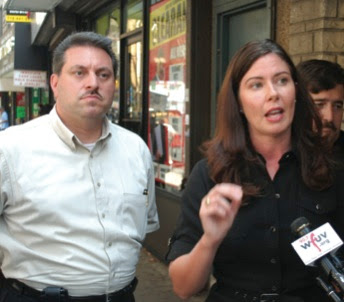 Area elected officials and community leaders are pushing the MTA to repair the elevated subway tracks above Jamaica Avenue, arguing that years of neglect has produced a dangerous eyesore that is stifling economic development in the area.

“For far too long, the Jamaica Avenue elevated train has been neglected,” said Crowley. “This is an accident waiting to happen… It is a serious situation that has to be addressed.” She noted that the structure was included in the MTA’s five-year capital plan that just expired but was eliminated due to lack of funding. Now, Addabbo and Crowley are pressuring the MTA to ensure that the work is included in the upcoming capital plan.

“I’ve been coming along Jamaica Avenue since I was a kid… and it hasn’t changed since I was five years old,” said Addabbo. “It looks the same, and that’s a sad story. I’m hopeful to bring this project to the forefront.” 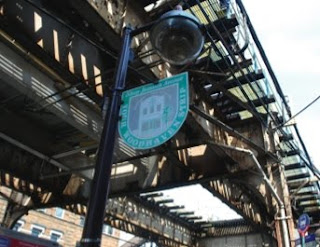 Thomson, who has been involved with the GWDC for more than two decades and is a thirty-plus year resident of the neighborhood, said “it’s time for Woodhaven to get some attention from the MTA” after being ignored for years. “For far too long, Woodhaven has suffered with this monstrosity,” she said, adding that the GWDC has been pushing to have the tracks repainted and repaired for the last 15 years.

Crowley and Addabbo made the case for repairs in a letter to Senate Conference Majority Leader Senator John Sampson, urging him to immediately move the project forward.

“Jamaica Avenue is lined with businesses and we believe it is on the cusp of turning into a thriving economic engine for the borough… Unfortunately, the most prominent feature is the rusty and deteriorating overhead J-line subway,” they wrote. “The condition of the elevated train not only deters visitors but is, most importantly, an accident waiting to happen.”

While the project has yet to go out to bid, Crowley said the repairs would likely require a multi-million dollar contract. “That’s what happens when you neglect steel for far too long,” she said. “I’m not sure why they haven’t [solicited bids] and that’s why we’re here today… People like to shop in a beautiful business district… It’s a tough economic time and painting the elevated train would definitely help businesses in the area.”

The proposed 2010-2014 MTA capital program contains $521 million for line structure rehabilitation, painting and enhancements including overcoat painting of 18.5 miles of elevated structure on the Brighton, Broadway-7th Avenue, Canarsie, Culver, Jamaica, Rockaway and White Plains Road lines. In addition, repairs are planned for 7.3 route miles of elevated structure on the Jamaica line and the Far Rockaway and Rockaway Park viaducts, added Parker
Posted by The Forum Newsgroup at 10:30 AM