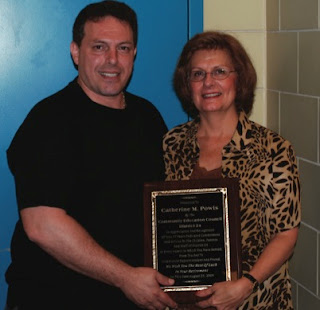 Hot topics at this month’s Community Education Council 24 meeting in Glendale included the ongoing push for upgrades at PS/IS 87, concerns over the conversion of the playground at PS 91 into a public park and a possible outbreak of swine flu this fall.

The meeting, held on Tuesday inside PS 91, began with a farewell to outgoing Superintendent Catherine Powis, who is retiring after 37 years with the district, and included election of the council’s officers for the coming year.

Prior to her final report as superintendent, Powis thanked many of the people she has worked with over her three-plus decades in the district. “I’m reordering my priorities,” she told the board and residents. “They’re called Sarah, Kate and Megan.”

She said her time here has been “very rewarding” and that she was “very fortunate to spend it in this wonderful district… I am very proud that I am part of this great district and its accomplishments,” she added, before being presented with a plaque from the council, a proclamation from Assemblywoman Cathy Nolan (D-Ridgewood) and heartfelt praise and well wishes from a number of parents.

Carlos Mercado, president of the PS/IS 87 parent’s association, told Sandy Brawer of the DOE that parents are “still fighting for our extension.” Among the most pressing issues is the lack of bathrooms, with just two stalls serving about 225 students on one floor. “We have kids who have medical needs who can’t wait,” he said. Other issues include the gym and cafeteria, which are not large enough to accommodate the school’s 600 students.

According to Mercado, the school agreed in 2000 to become the area’s first kindergarten through eighth grade facility under the understanding that the building would be expanded to handle the additional students. However, Brawer, the DOE’s Deputy Executive Director, had a different recollection of those events. “We understood that the facilities weren’t there to meet the needs of K through 8,” he said, adding that the parents still wanted to move forward with the change in grade structure.

Still, Brawer, who recently took part in a tour of the building, said he understood where the parents were coming from. “We do understand the cafeteria issues, and we do understand the bathroom issues,” he said. He noted that aside from the facility issues, “the building is in excellent shape” structurally. In addition, the majority of capital dollars generally go towards creating new seats within the overcrowded district. Hearings on the DOE’s next five-year capital plan will take place this fall, he added.

“We acknowledge some of the issues and are looking at what funding is available,” said Brawer. Once the DOE and SCA reviews the options, he will bring a proposal back to the education council. He wouldn’t rule out the possibility of a full addition, but stressed that officials are “going to be looking at competing interests in District 24 as to what the priorities are… The hope is that we will be able to do something to make it better.”

Council Vice President Peter Vercessi, who is a school administrator on Long Island, pushed Brawer to characterize whether the school’s facilities are at or below average. Brawer responded, “The building has needs, no doubt about it… but there are a lot of buildings in New York City that have needs.”

Several residents expressed concerns over the city project to convert the playground at PS 91 into a public park that is open after school hours and on weekends. Parents and board members accused the DOE of pushing this project on them without providing an opportunity for public input and fear the property will be destroyed.

Brawer explained that the project is part of a mayoral initiative designed to make the space available to the community. However, residents pointed out that there is a public park just two blocks away and said living next to a school yard is very different than living next to an open park. “They put a park out there but never had any community input,” said CEC 24 President Nick Comaianni, agreeing with residents who are concerned the location will become a magnet for misbehavingteens. “This is an ideal spot if I’m a teenager and I don’t want anyone to see me,” adding that the project never came before the council.

“Nobody in this community was notified – they’re just forcing this down our throats,” added a resident who lives adjacent to the school and wants the park only open during school hours. “We want this for the children of PS 91. They deserve it.” Adding insult to injury was seemingly minor decisions by the DOE such as to install regulation height basketball hoops, which are only useful for older teens. “The 104th Precinct has too much to do to come here every time we call,” she added.

Comaianni said the issue isn’t necessarily with the overall program, but rather the poor implementation of it in this case. “The program is not a bad program – I think the issue is you put it in the wrong school,” he said.

Brawer said he would bring these concerns back to DOE officials. He wouldn’t say definitively who has the final say as to what hours the park would be open, but noted that city money was used with the understanding that the community-at-large would benefit. He said the principal “has some leeway” as to the park’s usage, but wanted to look into the issue further.

Dermot Smyth, the area’s United Federation of Teachers representative, asked the board to consider devising a strategy to deal with a possible outbreak this fall of the swine flu, which killed 522 people across the country earlier this year.

Smyth referenced a recent report issued by a presidential panel report predicting a “plausible scenario” in which as many as 120 million people across the nation become sick, overwhelming hospital emergency rooms. The report suggested that as many as 1.6 million people could be hospitalized, with 300,000 intensive care patients.

He asked the council if the proper preparations are taking place on a local basis and asked members to come up with a “protocol” by next meeting. “We can’t leave it up to the chancellor and mayor” and instead need a “local answer,” he said.

In response, CEC member Brian Rafferty asked what exactly Smyth had in mind, noting that the council has limited power and doesn’t decide if schools are closed due to a swine flu outbreak. Comaianni reminded Smyth that the council’s requests in the spring that additional schools be closed were ignored.

Councilwoman Elizabeth Crowley (D-Middle Village) said her office would assist in coming up with a plan. “We need to make sure we get enough vaccinations… for those who are most susceptible,” she said, adding that a 27-year-old NYPD officer recently died from swine flu complications. “We need to make sure in our community that elderly and pregnant moms are the first to receive the vaccine. Then we have to make sure it’s available to the young,” she said.

A Crowley spokeswoman later said the councilmember is working with the health department to make sure proper precautions are taken in Queens, which was hardest hit by the swine flu outbreak this past spring.

Before the start of the regular meeting, the council held its annual elections. Comaianni was again named president and Vercessi was reelected as vice president. This year’s treasurer is Jeanne Forster, while Shwe Zin OO was again named secretary.
Posted by The Forum Newsgroup at 10:40 AM