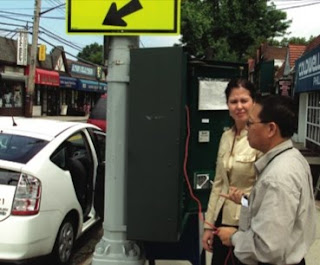 The city Department of Transportation has taken several minor steps to help alleviate traffic nightmares local drivers experience daily in the area of Dry Harbor Road and 80th Street in Middle Village after receiving complaints about the area.

Councilwoman Elizabeth Crowley (D-Middle Village) wrote several letters to the city DOT over the past few months after several constituents informed her of unsafe conditions at Furmanville Avenue and 80th Street and at 80th Street near Cooper Avenue.

In response, the DOT conducted an investigation of “the complex intersection of Dry Harbor Road, 80th Street and Furmanville Avenue” and has changed the timing of traffic lights to help improve traffic flow, according to a department spokesman. The light for traffic headed north on 80th Street will remain green for 11 seconds longer in the morning and six seconds longer in the afternoon, and the green light for westbound Furmanville Avenue traffic has been increased by six seconds in the afternoon.

The DOT will continue to monitor the area to determine if additional changes are warranted, according to spokesman Montgomery Dean.

In her letter to DOT Borough Commissioner Maura McCarthy, Crowley noted that an 84th Street resident “is concerned for the safety of the neighborhood” especially due to two schools in close proximity to the intersection. “Drivers are unable to make a left turn westbound onto 80th Street from Furmanville before the light turns red due to the large amount of cross traffic.”

In response to complaints from John Hegener of 67th Road, Crowley wrote that “something must be done to alleviate the excessive traffic conditions on 80th Street,” where “vehicles are at a stand still for blocks.” She suggested looking into solutions including adjusting the light sequence or altering the traffic pattern.

In an interview, Hegener, who has lived on the block for 54 years, said the problem isn’t as bad during the summer, “but once school starts again, 80th Street becomes a nightmare.” He also said the problem became much worse after the Shops at Atlas Park’s former owners, the Hemmerdinger family, convinced the MTA to reroute two bus lines past the Glendale shopping mall.

“It’s happened mainly since the mall [opened] and since the buses,” said Hegener. “It’s just discouraging because it all has to do with the mall, and there is nobody going to it now. Once they put in stores that people actually start going to, it’s going to be a real nightmare… It gets so bad on the side streets that feed Metropolitan Avenue that you have to sit there for three or four lights.”

Hegener said the one thing he doesn’t want to see the city do is eliminate on-street parking spaces so that traffic patterns could be altered. “The city will probably alleviate the problem by taking away parking, which will lead to more problems for the residents.”

In a press release, Crowley thanked the DOT for investigating the issue, which she said must be resolved to get drivers moving again on local streets.

“I am glad the [DOT] began looking into ways to alleviate traffic issues for drivers on 80th Street,” said Crowley after the department studied the area. “The people who rely on 80th Street on a daily basis are all too aware that during rush hour 80th Street is like a parking lot because cars aren’t moving. It is imperative that we fix this situation for the motorists, the students of PS/IS 87 and the residents of 80th Street.”
Posted by The Forum Newsgroup at 2:00 PM