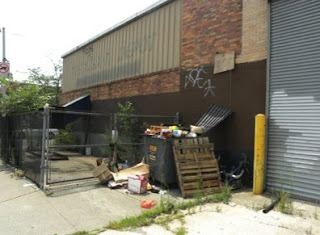 A local civic association is ripping the city for allowing the former Restaurant Depot property to turn into a weed-and-trash-covered eyesore that has become a dumping ground since the property was purchased several months ago for a high school.

The Juniper Park Civic Association, which fought against the city’s plan to build an 1,100-seat high school at the corner of 74th Street and 57th Avenue, released photos this week showing that the property has been overtaken by weeds, litter, debris and larger items including household furniture and building materials.

The problem has left local residents frustrated with the lack of accountability from the SCA, especially among those in the neighborhood who oppose the high school plan. “This is government at its worst. The School Construction Authority is an agency out of control and not answerable to the people,” said Manny Caruana, who lives several blocks from the property.

In response, a Department of Education spokesman said the debris that has accumulated at the site “was dumped illegally by passers-by” and was not placed there by the SCA “This week is the first full week we’ve had a contractor at the site, and, though we didn’t create this mess, we cleaned it up on Monday,” said William Havemann. “Now that we have a permanent presence at the site, we will ensure it remains clean and litter-free.”

The city initially suggested that if necessary, it would use its powers of eminent domain to acquire the 54,000-square-foot former Restaurant Depot property. In May, it agreed to pay $16,250,000 to owner Lucky Star Elmhurst, LLC, according to documents filed with the state. The property had been listed online for $15 million, and the DOE refused to explain the difference between the list price and the higher final sale price.

Despite opposition from local residents, civic groups, Community Board 5 and Councilwoman Elizabeth Crowley (D-Middle Village), the City Council voted 38 to 10 in April to approve the DOE’s plan for the 1,100-seat, $80 million facility. Last month, former City Councilman Thomas Ognibene filed a lawsuit on behalf of the JPCA and Communities of Maspeth and Elmhurst Together claiming that the SCA withheld information about high levels of toxic substances on the property.

“It is a disgrace that the city is allowing this already toxic site to become a monstrous eyesore for the community,” said Ognibene. He recently said in an interview with the Forum that Crowley, who voted against the school but wasn’t able to convince enough of her colleagues to do the same, “got drowned out at City Hall.”

The city Department of Buildings doesn’t have any records of complaints filed at the Restaurant Depot property, according to a spokeswoman. The Sanitation Department received 311 complaints regarding that address, and a “failure to store receptacle” summons was issued. While no illegal dumping conditions were found at the site, DSNY will continue to monitor the site, said a spokesman.
Posted by The Forum Newsgroup at 2:05 PM