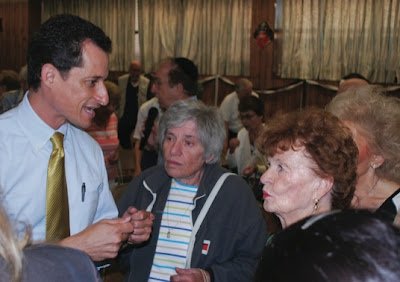 The debate over President Obama’s health care plan is gearing up on the national level, highlighted by town hall meetings across the country. At the same time, the discussion on the local level has been much quieter - with the exception of Rep. Anthony Weiner, who pushed his version of the plan during two recent stops at neighborhood senior centers.

Weiner (D-Forest Hills) dropped by the Austin Street Self-Help Center last Thursday for what marked the first public forum in the city on health care reform. That event, which was not widely publicized ahead of time, and a similar one on Monday in Howard Beach, did not attract emotional protests witnessed at public meetings elsewhere in the country.

At the Howard Beach Senior Center, Weiner pushed his “single-payer system” plan, under which all hospitals, doctors and other health care provides would bill a single entity for their services, eliminating administrative waste that currently exists. During a recent speech on the floor of Congress, Weiner argued that his amendment “would be less expensive… and would ultimately cover more people in a way they understand.”

Before a pre-lunch crowd of nearly 100 local seniors, Weiner argued that with 47 million Americans currently uninsured, the current system is already paying those costs in a less effective way. “We do in the form of high taxes,” he said. “Something has to give.” A plan is needed that will help “contain costs” but still “makes sure people can choose to go to their own doctors,” added Weiner.

In contrast to President Obama’s plan, which Weiner said makes some “very minor changes” to Medicare, the congressman’s single-payer amendment will come to the floor for a vote following the summer recess, according to Speaker Nancy Pelosi. “I think the President is making a mistake… I think we’re missing a big opportunity,” said Weiner, adding that the “insurance industry hates” his single-payer version.

Councilman Eric Ulrich (R-Ozone Park) said that “it’s a disgrace” that so many Americans don’t have health coverage. “Some of them are right here in this community” including many young adults who are having trouble finding work, he added. He credited Rep. Weiner for holding public discussions on national health care, despite the prospect of attracting protestors. “It’s wonderful we’re having this dialogue,” said Ulrich.

While a single officer from the 106th Precinct stood guard outside the senior center, there was no sign of any protests. Inside, Weiner faced some tough questions from the audience, including about long-term care, dental, assisted living and how the plan would apply to illegal immigrants. Of course, two of the main questions were about how the plan would be funded, and how long it would take to implement.

“The problem is, right now there are winners, and the winners are the insurance companies,” argued Weiner. He told one resident that we already are paying to cover the uninsured through the form of higher taxes. “But you are paying inefficiently” through emergency room visits and a lack of preventative care. “We’re going to wind up at the end of the day in my view paying less,” said Weiner. “Right now we’re paying for it – it’s not new things we’re paying for.”

One resident asked whether she would see the bill passed during her lifetime. Weiner responded that “two of the most powerful forces in Washington” – inertia and the insurance industry – “don’t want this to happen.”

After the discussion, which ended with the singing of “God Bless America,” Weiner said a large part of the effort is explaining the proposal to residents to clarify some of the myths, including that seniors wouldn’t be eligible to stay on their current plans. “It’s completely unfounded and one of the yarns that is being spun by the opponents of the plan to scare people… Most Americans want to hear the nuts and blots of the plan. I’m trying to sell them because I have a different plan than President Obama that I think is better.”

A spokeswoman for Rep. Gregory Meeks (D-St. Albans) said he is hosting a series of smaller gatherings with constituents throughout this southeast Queens district and will hold a teleconference to make sure all residents can take part in the discussion. A small meeting was held this past Monday at his office, and more will be announced in the near future, said his spokeswoman Candace Sandy.

Rep. Joseph Crowley (D-Jackson Heights) is not planning any meetings specifically about health care reform, but has been discussing the issue during general sessions with constituents, according to his communications director Angela Barranco. “I think he’s having all sorts of meetings where he will be talking health care,” she said, noting that there are a host of other issues constituents want to discuss, including the economy. “We didn’t specifically exclude it, we just didn’t chose to highlight it only,” added Barranco.
Posted by The Forum Newsgroup at 2:50 PM