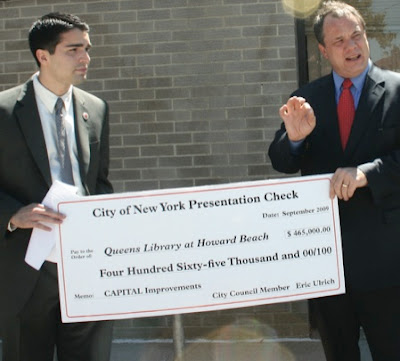 Councilmember Eric Ulrich has announced over $1,000,000 in capital improvements for libraries in Howard Beach, Ozone Park and Broad Channel as part of his allocation from the FY2010 budget.

Ulrich presented checks to Queens Library CEO Thomas W. Galante at the Howard Beach and Ozone Park branches on Tuesday afternoon following two successive press conferences in which plans for each of the three district libraries were released.

As part of the capital improvement plan two of the branches will get much needed repairs in addition to technological and customer service enhancements. The Howard Beach branch will get a much needed new roof, while Ozone Park is to get a new heating and cooling system. Many people, as Ulrich and Galante both pointed out, go to the library in extreme heat or cold to take shelter and save on home energy bills.

In addition to improving each of the properties physically, there will be a major push to raise the levels of customer service by introducing automated systems for returning books. Each of the three branches will get twenty four hour, seven-day-a-week book slots installed.

The new automated return system will provide customers with a receipt and they will be able to check online within one minute of their transaction to see that it is entered in the system. There will be slots on the outside of all the buildings and an additional terminal inside the library. Officials say that automated returns in the library offer patrons reduced waiting time and allow customers the convenience of returning materials at any time. It will also free up the staff so they can spend their time answering questions, organizing collections and advising patrons with any of their library needs, instead of checking in books.

“I would like to thank Councilman Ulrich for his tremendous support in bringing this money to the library,” Thomas Galante said. “Major enhancements will be made at these branches that encourage people to borrow and use the services.”

Ulrich pointed out that current economic conditions find people using libraries more than ever. “Some people might not have Internet access at home. Or they want to get a DVD or movie. Here they can do it free,” said Ulrich. “I am really pleased to have been able to deliver this funding for such beneficial and critical service;” the councilmember told The Forum, “for too long libraries were put at the back of the line behind other projects like transportation. Every dollar we invest in libraries today is an investment in the future.”

For those who will be using the library near to their homes or schools, the improvements are eagerly anticipated. Mary Siricchio and Florence Bierver were exiting the library as the press conference in Howard Beach was ending. Curious about the crowd of cameras outside, the two women inquired about what was going on. Upon learning their neighborhood branch was getting $465,000 in funding, both women were extremely pleased by the news.

“It’s very important to make sure the library is available to everyone,” said Bierver, “especially children.” Her friend chimed in, “it’s also important to the old children like us,” Mary Siricchio said. “It’s nice for all of us to get something that makes us all so rich like reading does.”

Queens Library is an independent, not-for-profit corporation and is not affiliated with any other library. The Queens Library serves a population of 2.3 million in the most ethnically diverse county in the U.S. With a record 23 million items in circulation for FY 2009, the library has the highest circulation of any public library system in the U.S. and one of the highest circulations in the world.

For more information about programs, services, locations, events and news, visit queenslibrary.org or call (718)990-0700.
Posted by The Forum Newsgroup at 3:10 PM