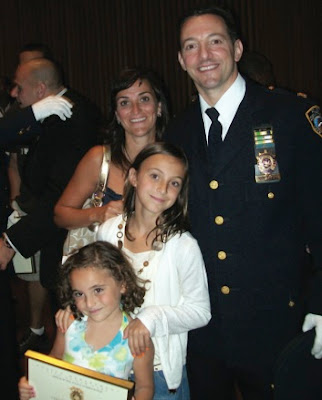 Sitting across the table from him, you realize he’s the same guy you knew from before. You used to call him Captain. Now you call him Deputy Inspector. But no matter what title you put before his name, Joe Courtesis is undoubtedly a cop’s cop. And as the commanding officer of the 106th Precinct. he’s the top cop, with his finger on the pulse of his precinct and the community.

Known for a hands-on approach to the job, Courtesis is well respected and has earned the reputation within the community, among business owners and residents alike, for being highly responsive. His 16-year career reached new heights last Friday when he was promoted from Captain to Deputy Inspector at a ceremony held at One Police Plaza.

He started as a patrolman then worked in the detective squad at the 83rd Precinct in Brooklyn. The first of several promotions landed him as a sergeant in Housing in Brooklyn. After that came another promotion–this time to lieutenant. In 2004, Joe Courtesis became Captain Courtesis. He spent two years at the 106 as the Executive Officer before going to the 113 to serve as the Executive Officer there until 2007.

He returned in 2007 as the Commanding Officer at the 106, where he says despite his promotion, he hopes he can stay. “I don’t want to leave the 106,” Courtesis says. “I’ve known this precinct for a long time. I like the community, the people, and the command. I have no requests to leave, only to stay,” he says with a wishful smile.

Asked how the face of policing has changed since the start of his career, Courtesis responds very quickly. “There is a tremendous degree of accountability now. Because of technology we have become a much more micro-managed agency.” Courtesis reminds us that his career in the NYPD started at the same time the department started developing and using Comp Stat to track and monitor crime patterns and frequencies.

He remembers the day when maps with pushpins hung on walls of station houses. “That’s how we tracked a burglary cluster.” The difference today he says is that with the touch of a button, investigators can immediately access every detail about a crime area including any convicted felons living in the area.

To further evidence the technology, the Deputy Inspector points to a computer station set up across from the desk. “When that camera turns and faces me, it means the Police Commissioner wants to talk to me.”

Courtesis says he is proudest of the fact that his promotion is one that comes not after a test, but after peer recommendation and approval by department brass. “It’s a hard promotion to obtain and it’s a great thing to be acknowledged by your colleagues.” The other thing that makes him especially proud, Courtesis says is seeing his wife and children so happy to share the moment with him.

And when you’re finished talking to Joe Courtesis he shakes your hand and thanks you for coming. You feel no less welcome than you did at the beginning but you know it’s time to go. The former Captain, now Deputy Inspector is standing before you. His hands are on his hips and he is smiling. For Joe Courtesis it’s time to get back to work.
Posted by The Forum Newsgroup at 3:00 PM