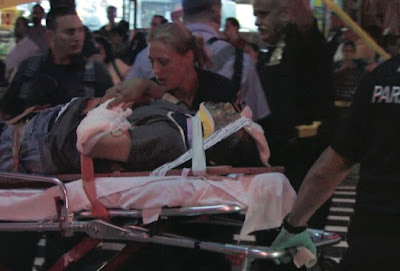 A 47-year-old Sunnyside man was struck by an unmarked police car while crossing Queens Boulevard with his girlfriend last week.

Witnesses told the Daily News that Evelio Villa and his girlfriend, Yanira Lopez, 55, had the green light when they started to cross the boulevard at 44th Street in Sunnyside last Thursday at about 8:30 p.m. “This guy was flying. He went like a bat out of hell,” a 23-year-old Woodside man who witnessed the collision told the newspaper. “There were no screeching brakes, no tire marks, nothing.”

However, NYPD Commissioner Raymond Kelly told reporters that Villa was “highly intoxicated” and “tried to run across the intersection.” He added that the driver of the vehicle, which was from the 109th Precinct and was responding to a call to assist an officer, slammed his face against the steering wheel and was taken to a local hospital to be treated for shock. He said investigators were looking at videotapes to determine whether the car ran a red light as witnesses insisted.

Villa, an unemployed construction worker, was listed in stable condition at Elmhurst Hospital Center, where he was treated for a fractured shoulder.