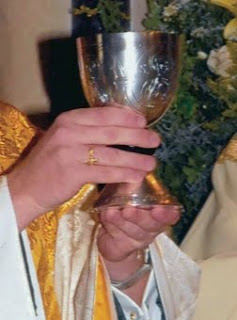 Two chalices stolen from St. Helen’s at the end of February were recovered by police after two men showed up at the parish rectory on Tuesday evening.

Howard Beach resident Thomas Kurplewski arrived at St. Helen’s Rectory accompanied by another parishioner. He was carrying a black plastic bag which he said contained the chalices. It was about 6 pm when Msgr. Al LoPinto opened the door for the men who told him they were there to return the chalices.

Msgr. LoPinto asked the men to be seated and informed them that he had to call police because of the ongoing investigation. Minutes later when they arrived, it was confirmed that the bag did indeed contain the stolen vessels.

According to police sources, Kurplewski told investigators that the chalices had been purchased from thieves on the street outside a Brooklyn housing project near Linden Boulevard, known as the Pink Houses.

Detectives who had vigorously investigating numerous leads in the case pursued questioning until Kurplewski admitted that it was his son, 20-year-old Theodore Kurplewski, who had broken into the church sacristy and stolen the chalices. He was subsequently arrested and charged with burglary and criminal possession of stolen property. The family lives just blocks from the church.

“I am just so thankful to God and to everyone who prayed for the return of the chalices,” said Fr. Rob Keighron. “The police, the press and the entire parish were all so supportive. I am glad that people recognized the wrong that was done here and that it was rectified.”

Msgr. LoPinto praised the police for their attention to the case and also expressed his thanks to the media for their handling of the case and to his parishoners for their support. “We’re so thankful to have this situation end this way. We so appreciate all the support that was shown since this incident occurred.

Deputy Inspector Joe Courtesis, commanding officer at the 106, said that many resources were dedicated to the investigation and credited Msgr. LoPinto for giving the police his full cooperation. The Inspector said he was looking forward to returning the chalices to the priests where they rightfully belong.
Posted by The Forum Newsgroup at 2:00 PM