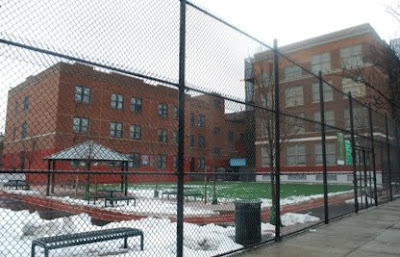 The city has scheduled a public hearing on the recently-unveiled plan to open a new K-5 school on the IS 73 property in Maspeth.

Education officials say the plan is feasible due to a “steadily decreasing” enrollment at IS 73 in recent years. It enrolls students in both 6th and 7th grades since it is fed by both K-5 and K-6 schools in the area. However, two of IS 73’s feeder schools – PS 49 and PS 102 are being expanded to K-8, contributing to the enrollment decline.

According to the DOE, IS 72’s current 7th grade class has just 590 students, compared with 715 students in 8th grade. Currently, IS 73’s 6th graders are housed in the annex building eyed for PS 873, but the DOE estimates that the space will be freed up for the new school as a result of the smaller 7th and 8th grade classes.

The DOE projects a combined enrollment for PS 873 and IS 73 of approximately 1,650 students in 2010-2011, well below the buildings’ capacity of 1,979. Of those students, between 270 and 350 students would be enrolled in the new PS 873. The change is intended to address the need to relieve elementary school overcrowding throughout District 24, according to the DOE.

The public hearing is set for April 14 at 7 p.m. inside IS 73, located at 70-02 54th Avenue. Comments can also be submitted by e-mailing d24proposals@schools.nyc.gov or by calling (718) 935-4198. Speaker signup begins 30 minutes before the start of the public hearing and will close 15 minutes into the session.

There will be no question and answer period at the public hearing, so for additional details on the proposal contact Natalie Ondiak of the DOE’s Office of Portfolio Planning at (212) 374-3482.
Posted by The Forum Newsgroup at 2:00 PM