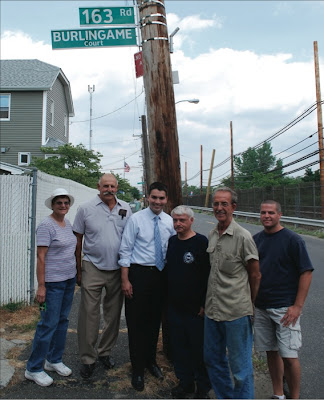 Council Member Eric A. Ulrich (R-Queens) on Friday joined relieved residents of Hamilton Beach to unveil new street signs that reflect both the street’s number and ceremonial name. There had been much confusion since the city replaced the numbered signs with only named signs last year.

As a result, residents requested that the signs containing the street numbers be reinstalled at several intersections.

“This has been an ongoing saga that led to delays of everything from food deliveries to emergency response times,” said Ulrich. “ I am pleased that my office was able to finally resolve this after years of frustration for local residents.”

“From day one it has been a public safety issue,” said Jonah Cohen, chief of the West Hamilton Beach Volunteer Fire Department and Ambulance Corps. “Police, firefighters and EMS didn’t know about the changes, and unfortunately there were a couple of occasions where it took a little longer to reach people.”

“Emergency vehicles have gone to the wrong side due to the confusion. The biggest benefit is that the new signs clarify that it’s Hamilton Beach and not Howard Beach,” said Fazio, adding there was “lots of frustration” before the situation was rectified.

Marie Persans, Vice President of the New Hamilton Beach Civic Association, said residents in the past have been forced to stand in the street to await deliveries. “The fact was people couldn’t get ambulances, deliveries, things like that. It was very upsetting. It was an inconvenience, but was also dangerous. We appreciate the Council Member taking this issue on and getting it resolved.”
Posted by The Forum Newsgroup at 11:07 AM